The ACU Theatre opened “100 Saints You Should Know” in Culp Theatre on Thursday night. The show, classified as a “studio premiere,” serves as a platform for students to direct and design a mainstage production.

The theatre returns to gritty subject matter, a theme for the current season, after the light-hearted production of “Is He Dead?” closed last weekend.

The play by Kate Fodor deals with a priest in a spiritual crisis and his mother, a single mother and her daughter and a teenage boy struggling with his sexual identity. The play touches upon themes such as desire, religion, the existence of God and right versus wrong. 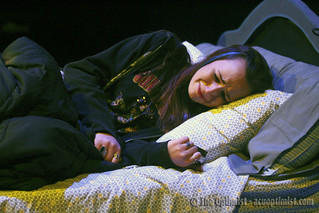 Senior Matthew Silar makes his ACU mainstage directorial debut with this piece. Silar’s potential is apparent and his creative choices shine in the show. His concept of the cross is strong and the design team incorporates this concept in both subtle and obvious ways.

Costume designer Alex Eddins dresses each character in garb that effectively communicates social class, age and character traits. Eddins, a junior, includes crosses in her costumes on different levels to tie into the show’s concept.

The set was designed by senior Amanda Martin. Her simple set acts as a slate for the play’s filmic nature and its beautiful blue tones match the story’s feel. The set features a tree which is called for in the script. This unique set piece helps further Silar’s concept in both symbolic and literal ways.

The five person cast works cohesively to share this story.

Junior Ryce Garren leads the cast as Matthew and shines in a monologue near the end of the first act.

Taylor Hunt, a junior, gives a strong performance as Theresa. Hunt’s ability to portray a lost woman attempting to be strong resonates with audience members.

Sophomore Kaitlyn Sacco effectively portrays Colleen, an elderly woman, despite her young age. She creates a persona beyond her years through her posture and mannerisms.

The stand-out performances come from freshman FaithAnn Jones and sophomore Jon Tlapek. Jones portrays Abby, the angsty, drug-using daughter of Theresa, in a gritty and authentic performance. She has audience members frustrated with her character while sympathizing at the same time. The actions she plays are strong.

Tlapek creates an exceedingly strong character with his portrayal of Garrett. The audience has no trouble believing he is an awkward, confused teen who just wants to be OK. He leaves the audience wishing his character had more stage time.

“100 Saints You Should Know” is a compelling show that leaves the audience with a lot to think about.

The show has its remaining performances on Friday at 7:30 and Saturday at 2:00 and 7:30 in the Williams Performing Arts Center’s Culp Theatre. Tickets are available online at acu.edu/theatre or by contacting the box office at 674-2787.

Members of the Abilene community gathered together to walk across the Martin ... END_OF_DOCUMENT_TOKEN_TO_BE_REPLACED