You are here: Home / Life / FilmFest delights with original productions

Lucius Patenaude’s Best Picture-winning film, For Always, is a delight to watch. The characters come to life in the short 10 minutes allotted to the piece and allow actors Matthew Silar, Rachel Faulkner and Jon Tlapek to shine. Every shot of the film is clean and crisp, allowing for an overall aesthetically-pleasing feel. The film’s compelling message serves as a reminder to cherish the ones you love and make the most of the time you have with them. 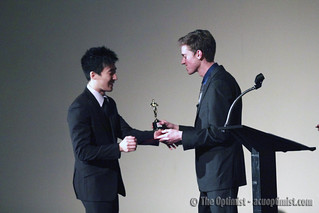 Kyle Knapp swept the awards for Best Director and Best Screenwriter with his film It’s Locked. The film had audiences on the edge of their seats during last week’s FilmFest Gala. The suspenseful writing is just enough to frighten without causing panic. The setting of an empty college rental home resonated with the ACU audience. Knapp has definitely found his niche with suspense.

While congratulations are in order for all FilmFest winners, there were some some stand-out films that got little to no recognition. David Porter’s film Wedded Wiket Residents was a beautiful, stirring piece with characters clearly developed far beyond what the short film portrayed. Zach Carstens’ nearly flawless film Key of L was a truly touching film in which love is expressed in different musical styles.

Other snubs include categories that do not have an award. Many of this year’s films had an original score and one should have been awarded Best Original Music. Standouts include Alex Carstens and Claire Warlick for Key of L, Joel Edwards for Wedded Wiket Residents and Caroline Nikalous for Just a Glimpse.

With a growing number of films, awards for Best Supporting Actor and Actress would not go amiss. Jon Tlapek should have received recognition for his brief, yet hilarious appearance as Brad in For Always and Hailey Hendricks should have recieved a nod for her role in It’s Locked. Other potential winners of these would-be awards include Haleigh Motz for Houdinis and Andrew Koenig for Key of L.

You are here: Home / Life / FilmFest delights with original productions

For the first time since 1967, three outdoor commencement ceremonies honored graduates on Friday and undergraduates on Saturday. To comply with state health guidelines, graduates were socially distanced across the field while friends and family celebrated their accomplishments in the stands of Wildc...
View on Facebook
·Share

Members of the Abilene community gathered together to walk across the Martin ... END_OF_DOCUMENT_TOKEN_TO_BE_REPLACED