Doing away with clubs and caddies, disc golf is the growing sport craze among college students and on ACU’s campus.

The hybrid of a sport is played much like golf, the goal being to get the disc into the basket in as few shots as possible.

Disc golf came to the ACU campus in 2008 when the kinesiology and nutrition department met to brainstorm new activity courses that could be added while the new Student Recreation and Wellness Center was under construction. With no gym access for regular classes, they decided to add a traditional games class and a disc golf course.

With no one in the department having ever played disc golf, Deonna Shake, instructor of exercise science and health, volunteered to learn and teach the new sport. She attended a national physical education conference and met professional and world champion disc golfers Jay and Des Reading during a disc golf workshop to ask for advice about offering a college course.

With the help of many people on and off campus, Shake raised more than $18,000 to construct a campus course designed by Reading.

“Our first ACU disc golf class was offered in the fall of 2009 and since then, it has always filled up right away,” she said.

Reading was in charge of the Texas Collegiate Disc Golf Championship and wanted ACU to round up a team to compete. Last fall, Reading texted Shake with the message, “Will the Wildcats answer the call?”

Shake said it was exciting to have positive response from students who took an interest in competing. Over the Fall Break weekend, four students in Shake’s disc golf class faced off in Round Rock, placing fourth against 10 other university teams.

“We were one spot from qualifying (for nationals), but we played well enough to get a top seed spot in case another team could not attend nationals,” said Cory Nickodam, senior information systems major from Burleson. “Several schools were unable to attend so we were extended an invite.”

However, the invite was not a hole-in-one opportunity.

“My first thought was ‘This is a big deal’, but it will be tough for these guys to miss school, find a way to get to the site and come up with over $400 each to make this happen,” Shake said. “The guys scrambled to think of fundraisers, but we found out so late in the game that it was tough, so I wrote some desperation emails to my department chair, dean, provost and others.”

The team was able to secure both financial and academic support.

“The Campus Store even donated team shirts because uniforms were required for the broadcasters to identify schools,” Shake said. 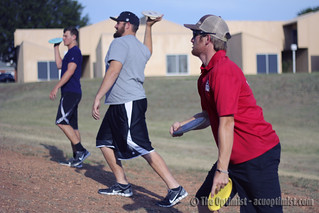 “The first day was the most serious,” Story said. “After two rounds on day one, all the teams were divided into two flights: championship flight, the top half or first flight, bottom half.”

ACU grabbed a spot in the championship bracket after a four-way tie for the last three spots, winning in sudden death against Texas Tech, Wisconsin and Kansas State.

The last few days of competition, ACU wrangled with not only national-regulars, but Mother Nature as well.

“The guys played in a hard rain and wind storm compared to some teams ahead of them who teed off before the storm hit,” Shake said. “But in the long run, ACU placed 38th out of 95 teams.”

Individually, the ACU golfers proved they had game.

Clinton placed sixth overall in the Mini-Marker Disc Tournament. Nickodam won the National Putting Hot Shot Challenge and scored the highest in that competition. With 48 out of 50 putts, he scored 975 out of a possible 1050. The next closest competitor scored 850. Both competed against about 400 golfers from across the country.

Shake said she is proud of her team.

“They got to compete against collegiate disc golfers from all over the nation,” she said. “It was a great opportunity to see where we stack up, and to enjoy an electric atmosphere. My hope is to have an ACU Disc Golf Club in place in the fall and to continue to field teams at the state and national levels.” 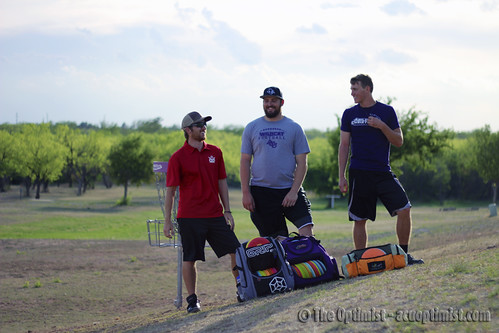 The Wildcats’ Western Athletic Conference tournament run and season came to a ... END_OF_DOCUMENT_TOKEN_TO_BE_REPLACED