The ACU Opera team hopes to introduce ACU students to the genre with “Susannah,” an Apocryphal story, this week.

Jarrett Ward, senior vocal performance major from Houston and member of the marketing team for “Susannah”, said students should have more appreciation for opera music.

“The music of opera makes you think, and often makes the listener experience emotions they did not expect,” Ward said.

Jennifer Magill, who plays Mrs. McLean, the antagonist in the show, agrees. 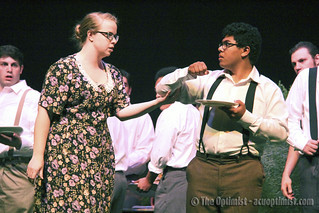 “I love how opera and classical music has a power to tap into one’s emotions and take you on a musical journey,” said Magill, junior music education major from League City.

“Susannah” is not a story found in the Christian Bible, but is a commonly told Apocryphal story. This version of the story is set in 1940s era Tennessee. While the production is completely free to students, the ACU Opera has still gone over the top with sets and costumes, even going so far as to cover the floor of the Civic Center with grass.

“All of the aspects of this opera are bigger and better than we have done before,” Ward said.

Hembree plays Susannah at the Saturday night show, and is grateful for the opportunities and relationships ACU opera provides.

“ACU opera is made up of hard working students who build our own sets, make or find our own costumes and raise our own money,” Hembree said.

“Susannah” has two casts with performances at 7:30 p.m. Thursday and Saturday at the Civic Center. Students will receive free admission. 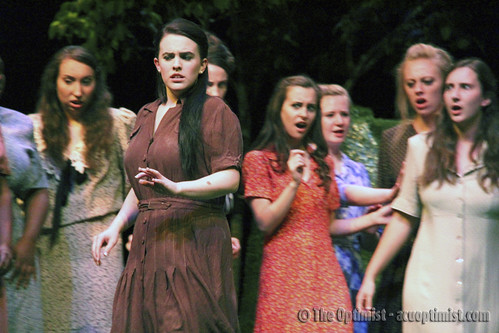 The Saturday night cast of "Savannah" rehearse the opera at the Abilene Civic Center. (Optimist photo by Ashlyn Anthony)

Breaking: The university’s mask mandate for instructional spaces will end Friday. No additional requirements will be implemented, but approved instructors may still require face coverings in their classrooms.

This is not the same campus for everyone - Optimist

“Lose the beanie.” “Change your shoes.” “Don’t ride the skateboard, if you’re going to wear the beanie.” The “gay check” was a routine part of every morning for Jalen Garza, junior...
View on Facebook
· Share