You are here: Home / Life / Fort Worth Opera puts on annual festival

When most students think of opera they likely conjure images of a phantom in a mask or of a large woman wearing a horned helmet while belting out songs at decibel levels too high for the human ear to hear. These stereotypes, while not undeserved, often prevent students from experiencing the artistic magnificence of the operatic tradition. ACU students had the opportunity to be exposed to the opera last week when ACU’s opera presented “Susannah,” and the Fort Worth Opera is the ideal place for them to expand this interest.

Founded in 1946 by three women desperate to provide culture and artistic value to the area, the Fort Worth Opera has since become a respected and even renowned company. In 2007, the opera made history by becoming the first American company to switch to a festival format. Instead of pacing their performances throughout the year, the Fort Worth Opera puts on a festival every spring, giving attendees the opportunity to see as many as four shows in one weekend. 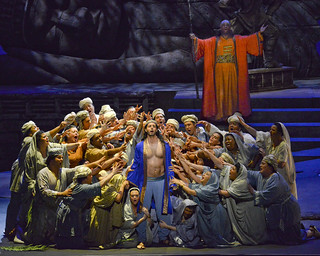 Zurga, the leader of the fishermen must decide Nadir’s punishment. (Photo courtesy of Fort Worth Opera)

This year’s festival contains selections as classic as “Hamlet” and as modern and as innovative as the World War I drama “Silent Night.” I was lucky enough to have the opportunity to attend a performance of the “The Pearl Fishers,” a little-known opera composed by George Bizet. The show is sung entirely in French with English and Spanish subtitles projected on a screen above the stage.

I was as skeptical as anyone upon attending the opera, considering it an excuse to dress up, but expecting that the performance itself would bore me. Instead, I found myself fascinated by the mythical story of “The Pearl Fishers” and captivated by the sheer power of the performer’s voices. The opera is not lacking in entertainment; dancing, lavish costumes and large sets fill the stage, but in reality, the performers could command attention simply by opening their mouths and singing.

Attending the opera is an experience in and of itself. The Fort Worth Opera currently produces all of their shows in the Bass Performance Hall, a beautiful, elegant space that creates a pristine atmosphere. Prior to the performance, audience members could take pictures with costumed actors and mingle in the impressive lobbies of the building. Attending the Fort Worth Opera is an investment in an experience that provides a taste of a life spent in the arts.

The Fort Worth Opera’s 2014 Festival runs for the next two weekends. Ticket information is available at www.fwopera.org.

You are here: Home / Life / Fort Worth Opera puts on annual festival

The Wildcats’ Western Athletic Conference tournament run and season came to a ... END_OF_DOCUMENT_TOKEN_TO_BE_REPLACED