The Wildcats improved their record to 4-10 in conference over the weekend, as they took matching 3-1 wins over the Cowgirls and the Colonels.

In the game against McNeese, junior Jennifer Loerch and senior Taylor Nix combined for 26 kills for the ‘Cats, one of the main reasons for ACU’s success.

In the second match, the Wildcats left their opponents at 17 points and gave them a record of 14-16 and 4-10 in the conference.

“The season isn’t about the amount of wins or losses,” said Nix, outside hitter from Crawford. “It’s about showing that we aren’t going to give up. We are setting the tone for the program under Jason’s lead.”

Against Nicholls State (5-9), ACU utilized tactics from their previous win to improve their record once more Saturday. The Wildcats fell behind after the first set, 21-25, but then bounced back to take the next three, 25-17, 25-21 and 25-17.

Loerch, junior outside hitter from Georgetown, had another 15 kills and four blocks, while teammate Lexi Mercier, sophomore middle blocker from Centennial, Colorado, finished the match with 10 kills and six blocks.

“It felt so good getting these past two wins in conference,” said Brooke Ray, sophomore defensive specialist from Lucas. “We are finally playing so well together, and the chemistry on the court is incredible.” 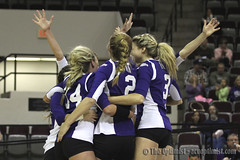 The team has a chance to continue their winning streak and take two more wins this week against Stephen F. Austin and Northwestern State.

“This past week has given us a ton of confidence and hope going into this week against two really hard teams,” Ray said.

“We will fight no matter what the odds, and we will continue to play with pride for not just ourselves but for each other and the ACU volleyball program,” Nix said.

Dr. Phil Schubert told faculty and staff in a town hall this afternoon that 10 of the 14 active COVID-19 cases at ACU are student athletes, evenly divided between two sports. Football has zero positives.

Dodd Roberts, director of the Halbert Center for Missions and Global Service, plans to open a Bahama Buck's location in the Allen Ridge development. Read more below:
https://acuoptimist.com/2020/09/new-bahama-bucks-coming-to-abilene-in-2021/

Dodd Roberts, director of the Halbert Center for Missions and Global Service, plans to open a Bahama Buck's location in the Allen Ridge development. Read more below: ...

Bahama Buck’s is looking to open a new location in Abilene in 2021 after frequent trips to ACU and the surrounding community. The trailer is operated by Dodd Roberts, director of the Halbert Center for missions and global service. Roberts currently has one Bahama Buck’s location in San Angelo an...
View on Facebook
·Share

COVID-19 regulations have caused multiple changes to how students are experiencing chapel this semester. In place of normal chapel times, students can take place in three different types of chapel throughout the semester including small group chapels, spiritual formation events and community groups....
View on Facebook
·Share

Members of the Abilene community gathered together to walk across the Martin ... END_OF_DOCUMENT_TOKEN_TO_BE_REPLACED