You are here: Home / Features / Epps proves excellence on both sides of the ball

From offense to defense to special teams, ACU junior Jonathan Epps can do just about anything on the football field.

Epps is second on the team in all-purpose yards with 788 behind freshman redshirt running back De’Andre Brown’s 949 yards coming from passes and kick and punt returns. He also plays a key role on the defensive side of the ball, recording 24 total tackles and two interceptions, including one returned for a touchdown as a cornerback. 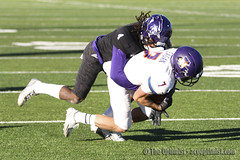 After transferring from Tyler Junior College this season, Epps scored his first touchdown of the year on Oct. 25 against Sam Houston State after catching a 14-yard pass from sophomore quarterback Parker McKenzie.

“It felt good,” Epps said. “I was excited. I guess it came at a good time. I didn’t like the fact that we (were) losing, but getting to score a touchdown is always great, so I was excited about that.”

Epps played defensive back for TJC his freshman year but was moved to receiver for the Apaches last season as a sophomore, finishing the season with 26 catches for 322 yards and one touchdown.

But Epps said coming to Abilene has been a huge change for him on the field and academically.

“(Getting to play for a Division I program) is great,” Epps said. “Especially because I love ACU and the program and the culture. Coming from a junior college to a D1 program was a big difference. The talent, the school, the classes, just everything is great. I’m blessed to be here, really.”

Epps said football and the ACU football program as a whole were important in his decision to transfer to ACU, but his beliefs were at the forefront of his selection.

“(My faith) was the biggest part of it,” Epps said. “One of the reasons why I came to ACU is not because of the program, not because of the people, none of that. I sat and I prayed all summer and I felt like this is where God was taking me so I just went with it. That’s why I’m here.”

Epps is the Wildcats’ best utility player. He is able to play receiver, kick and punt returner and cornerback and even gets to rush the ball every once in a while. Epps said by playing multiple positions, he can emulate the play of many different professional football players, including one of his personal favorites.

“I’ll say one of my favorite athletes is Percy Harvin because he’s so versatile,” he said. “From catching punts to getting the ball and getting a bit more explosive, that’s somebody that I’ll watch before games and model my game after. I just love the way he plays.”

From his 97 receiving yards, his 45 rushing yards, his more than 500 kick and punt return yards and his two interception game against Central Arkansas, Epps has become the team’s most adaptable player, and earns his reputation as one of the best multi-role players in the country.

“It doesn’t mean much,” Epps said. “I do whatever I can to help the team. It’s not about me. I love my teammates, I love my coaches, everything about it. There’s no ‘I’ in team and whatever coach asks me to do, I’ll do it. Sacrifice, sacrifice.”

Epps said all his responsibilities on and off the field limit time to himself, but he has to persevere.

Epps has high hopes for himself and his future as a football player, and ACU is just the place to prepare him for the goals he’s set for himself.

“As a Division 1 football player, for me, my goal ultimately is to make the NFL,” Epps said. “The chance of that is slim, but I try not to think of it like that and try to put all my efforts toward it. If it doesn’t happen, it doesn’t happen, but if it does, that’s great. That’s something I want to do.”

Epps and his fellow ‘Cats will play their final home game of the season against Northwestern State at 2 p.m. Saturday.

You are here: Home / Features / Epps proves excellence on both sides of the ball