The ACU volleyball team played its last match of the 2014 season at home last Saturday against the Northwestern State University Demons. 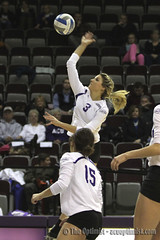 “I thought the team fought hard all season which was good to see,” said Jason Bibler, head coach. “The girls progressed really well this season; it was disappointing to not see that carry over to the win column.”

In her final match, Borger, senior middle blocker from Amarillo, led the team in blocks, recording five block assists for the day. Borger concluded her college carrier with .85 blocks per set and hit .172.

Riley, senior right side hitter from Flower Mound, recorded 14 kills right behind Jennie Loerch, junior outside hitter from Georgetown, who had 16. Riley finished the year with 1.49 kills per set hitting .137.

Nix, senior outside hitter from Crawford, contributed to her team’s offense when she recorded two back-to-back kills giving the Wildcats their first lead in the fourth set. Nix ended her senior season hitting .136 and 1.29 kills per set.

Loerch also received a Southland Conference honorable mention for the 2014 season. She consistently led the Wildcat’s offense as she recorded 419 kills, 1,340 attempts, 15 aces and 254 digs. Loerch finished her junior season with 3.71 kills per match, ranking fifth in the Southland Conference.

“We realized that we’re actually a good team and we can compete at this level, but our biggest downfall was our mental game,” Loerch said. “We’re going to do what it takes to push through that barrier and work toward games that we should win.” 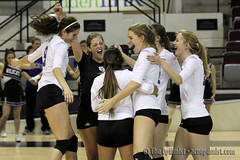 The Wildcats had a difficult season for the most part, but are hopeful for next year.

“We are in a better place right now than we were during two-a-days, and that is good,” Bibler said. “I think the girls are ready to start working this spring and get ready for next season. Nothing comes easy, so we will have to go out and prove how good we are.”

Student life added a new position to its staff with the hiring of Dr. Ryan Richardson, associate vice president for student life, Aug. 19. Richardson previously worked at Baylor for over 20 years, serving as associate chaplain and director of worship and chapel. While a difficult decision to leave W...
View on Facebook
·Share

Members of the Abilene community gathered together to walk across the Martin ... END_OF_DOCUMENT_TOKEN_TO_BE_REPLACED