You are here: Home / Features / From Africa to Abilene

No one would think while looking at Micah that he is originally from Nairobi, Kenya. He speaks with no accent, and his long blonde hair paired with fair skin gives no sign that he spent the majority of his life living in Africa. To any passerby, Micah would look like an everyday college student, but he initially felt out of place at ACU.

“It’s hard to tell someone you’re American when you have never experienced the culture of your home country for an extended period of time,” Micah said. “I remember sitting in the dorms freshman year and not knowing anything about baseball or what an inning was.”

Micah is a second-generation Wildcat. Both of his parents attended ACU before entering the mission field.

“My mom actually came to America for college after living in Vienna and working in the mission field distributing and smuggling Bibles into the Soviet Union with my grandfather,” Micah said. “My mom didn’t plan on entering the mission field again when she met my dad, but he was passionate about it. After a few scouting trips, they found a group of former ACU and Harding students already established in Kenya and decided it was the place for them.”

Micah’s journey to ACU has helped him learn about the American culture.

While he had visited the U.S. as a child and young adult, he and his brother had never experienced life in the States for an extended period of time until coming to college.

“The difference between here and Kenya was night and day, and while racially I may fit in here more than in Africa, I still felt isolated and out of place culturally,” Micah said. “It really took my finding a core group of friends to invest in who I am for me to feel that I fit in.”

For Micah, the typical African stereotypes that followed him were fun at first. He would play along with some of the more extreme and ludicrous questions that curious people would ask him. 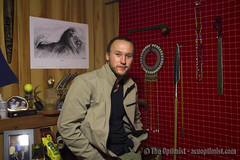 Conway sits in his house.

“I had so many people ask me the classic: ‘If you’re from Africa, why are you white?’ and things like that. But other questions were fun to play with. I loved getting asked if I had lions in my backyard or if I rode an elephant to school. I’d play along and have fun with it at first, but eventually I let them in that I was joking.”

The stereotypes and cultural misinformation about Africa Micah found when living in the States have motivated him and his brother, Andrew, to educate people on the Africa they know.

“What me and my brother are passionate about is showing people that there is more to Africa than starving kids and the things you see on CNN or Fox News. Those things are terrible tragedies, but there is so much more to Africa,” Micah said as he twisted the beaded bracelet on his wrist. The green, red and black beads form the three stripes of the Kenyan flag; no doubt a reminder of home. “We want them to see the Africa we fell in love with, the beauty, the people, the culture and the land that we call home.”

Micah and Andrew plan on starting their own safari-guide company focused on East Africa once Micah is done with school. Andrew returned to Kenya after gradating from ACU and was able to find work as a private safari guide after studying in South Africa and receiving his Safari Guide License.

“In a nutshell, Micah and I want to have our own guiding service,” Andrew said. “We want to coordinate, plan and show people the wild places of Africa. We want to be the ones who meet you at the airport and are giving you an experience that is beyond something you could have imagined.”

Andrew had an experience similar to his younger brother’s when he came to ACU from Kenya.

“I was also surprised at how little people knew of Africa and Kenya. Some people could not figure out why I was from Africa or how that could be if I was white. We had completely different lives growing up. Some people just wanted to get a five-minute National Geographic story from me then move on to chat with someone else.”

The shared experience of simple misunderstanding and misinterpretation of Africa is what has driven the Conway brothers to their passion of showing the Africa they know. It’s more than home to the Conway brothers; it is a spiritual connection they want to share with others. To them, exploring the beauty and mysticism of Africa is a form of worship.

“There is something about the African bush that awakens something inside me that I don’t feel anywhere else,” Andrew said. “There is no way to describe what it is like being in the presence of a huge male lion or watching a herd of elephants move across the plain. In the bush, we get to see creation as God intended it to be. Being in the bush is a spiritual experience for me. It forces you to take in God’s creation, to look, hear, see, smell the presence of God; something we forget to do in the city.”

You are here: Home / Features / From Africa to Abilene

The Wildcats’ Western Athletic Conference tournament run and season came to a ... END_OF_DOCUMENT_TOKEN_TO_BE_REPLACED