You are here: Home / Sports / Men’s tennis to open season on the road

The men’s tennis team will open its season on the road this weekend. The Wildcats will be traveling to Dallas as they prepare to take on Midwestern State, Troy and Southern Methodist University.

The team has shown much improvement since last season by not only improving its individual play, but also by coming together closer as a team.

“We are much more together as a team, and we have been practicing and improving as a team and as individuals,” junior Brandon McCarty said. “We are well practiced and ready for whatever may come our way.”

The Wildcats are no strangers to opening up their season away from Abilene. Last year, ACU traveled to Colorado for its season opener and brought home wins over Metropolitan State University and the University of Northern Colorado. 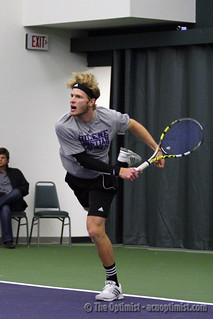 “Opening on the road is always tough,” said McCarty. “Playing at someone else’s courts is always an adjustment, but at the end of the day, it’s just another match we can win, regardless of the setting.”

Although it still early on in the season, the Wildcats are still predicting a tough performance and are ever more proving that they are ready.

“We’ve been training heavily and working on our match play to prepare for this season,” McCarty said. “We have the established base and now we’re just fine tuning our games to be completely ready.”

The Wildcats have one leading senior on the team, Guilherme Gesser. The three new freshmen Henry Adams, Paul Domanski and Brad Gleason, will look to fill big shoes this year.

The junior Oklahoma native, Jason Proctor, has also contributed a great amount of successes to the Wildcats, as he describes where the basic improvement and confidence roots.

“I feel confident about my game right now,” Proctor said. “I draw confidence from the work I’ve put in last semester and so far this semester. It is also crucial that we energize each other through confident attitudes, and that we stay patient with ourselves, not setting expectations too high for these first events of the season.”

The Wildcats will continue to be away even after this tournament, as the team will be traveling to Kentucky January 29th and 30th.

You are here: Home / Sports / Men’s tennis to open season on the road

Members of the Abilene community gathered together to walk across the Martin ... END_OF_DOCUMENT_TOKEN_TO_BE_REPLACED