You are here: Home / Sports / Wildcats can’t keep pace in second half

The Wildcats suffered their first conference loss of the year with an 82-64 loss at the hands of the Stephen F. Austin Lumberjacks in Moody Coliseum Saturday afternoon. The Wildcats move to 9-8 with a 3-1 conference record, while SFA moves to 4-0 in conference and extends its win streak to 12 games. The game was the first ever nationally televised game to be broadcasted live from Moody Coliseum. 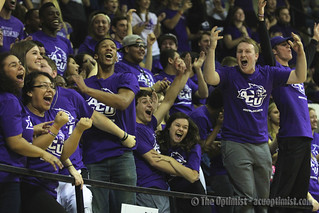 Students of ACU’s Wildcat Reign cheer on the Wildcats in the first half of the game.

“Their a darn good team,” head coach Joe Golding said. “I thought we came out and got off to a good start. We played hard and had a lot of momentum rolling in that first half. In the second, I felt we didn’t handle our composure very well but overall we played hard against the conference champs.”

Junior Austin Cooke was the only Wildcat to finish in double digits, scoring 10 points with four rebounds and three assists. Seniors Harrison Hawkins and LaDarrien Williams struggled, like many other Wildcats, combining for 18 points on 5-19 shooting. Junior guard Parker Wentz was 2-10 and 1-6 from three for seven points in 33 minutes of action. The Wildcats shot under 40 percent for the game but were .500 from beyond the three point arc (8-16). 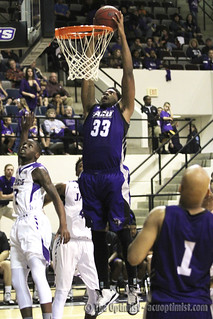 Duran Porter dunks in two of his eight points for ACU.

Stephen F. Austin, thanks to a 63 percent second half, finished at 59 percent from the field for the game. Their size overmatched ACU, winning the rebounding battle 39-25 with 20 second chance points and 19 points off ACU turnovers. In the first half however, the Wildcats forced the Lumberjacks to commit nine turnovers, which was a big reason for the team’s success early on.

“They made some mistakes early and we were able to steal the ball and get some extra looks,” Golding said. “We knew that they would come back in the second half and that’s where their experience and talent showed off.”

The Wildcats kept step for step with the Lumberjacks in the first half, fueled by a crowd of nearly 2,900 people. ACU came out hungry and led 12-11 after a layup by sophomore Riley Payne. SFA extended its lead to seven after a steal and fastbreak layup put them up 23-16. The Wildcats would make their move in the last five minutes of the half, going on a 16-4 run to take the lead.

Freshman role players Drake Green and K.J. Maura helped swing the momentum for the Wildcats. Green converted a layup and then a corner three on back to back possessions to tie the game and then give ACU the lead. Then Maura, with two seconds left, made a deep three to put the Wildcats up 37-33 at halftime.

“That’s probably the loudest Moody has been since Sub-T last won Sing Song,” Golding said. “It was great to have the crowd with us and we’re so thankful to them for their support.”

“Their size was definitely something we had to deal with and we struggled with it,” Cooke said. “We couldn’t control the paint like we wanted and it was a big reason why we couldn’t get the win. It’s a big step for us though, facing competition like this. I’m glad to be here with a program that’s trying to get on the map.”

The Wildcats will now look to McNeese State (6-8, 0-3) to get back on track. The game is scheduled for Tuesday night at 7 p.m. in Lake Charles, Louisiana.

You are here: Home / Sports / Wildcats can’t keep pace in second half

The Wildcats’ Western Athletic Conference tournament run and season came to a ... END_OF_DOCUMENT_TOKEN_TO_BE_REPLACED