You are here: Home / Sports / Wildcats fall to SFA in overtime

The ACU women’s basketball team was defeated by the Stephen F. Austin Lady Jacks on Saturday afternoon at Moody Coliseum, 71-69, dropping their overall record this season to 8-7 and their Southland conference record to 1-3.

After starting the season 5-0 at home, the Wildcats are now 0-3 in their last three games at Moody, all of which were conference matchups. 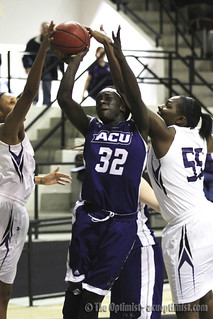 Sophomore Lizzy Dimba had a team-high 17 points and 10 rebounds for ACU against SFA.

“We would like to build a reputation where people don’t want to come play in Moody, where [it] is a scary place to play,” head coach Julie Goodenough said. “But the only way to do that is to start finishing games at home, and now we’ve let three conference games slip out of our hands at home and we’ve got to figure out how to finish.”

After getting routed on Sunday, Jan. 11 at home against Nicholls State, 63-39, the Wildcats have gone 1-1 since, playing well against two of the conference’s best teams, McNeese State University and Stephen F. Austin University.

“I think that we responded really well after the disaster last Sunday,” Goodenough said. “Our team could’ve fallen apart after that embarrassing loss, but we didn’t. We came back to practice and the players were really focused and worked really hard. I think these last two games, the [75-59] win at McNeese [last Wednesday] and the loss today, might’ve been the best team games that we’ve had, where the bench was really prepared to come in to contribute, the starters got started off fast and so I think that we’re showing huge strides.”

The now 1-3 Wildcats were able to play a great game against one of the best teams in the conference, the 3-1 Lady Jacks, including a stretch of 23:43 of in-game time between the first half and overtime where they didn’t allow Stephen F. Austin to lead a single time.

“I think [we’re making] huge strides as a program to be able to challenge a perineal powerhouse like Stephen F. Austin, to be able to put them on the ropes and challenge them for as long as we did today, but there are no moral victories,” Goodenough. “We’re not going to pat ourselves on the back for this. We’re pretty angry because we didn’t make free throws when we needed to, we didn’t seal the deal in regulation and we shoot 50 percent from the line in the overtime period, so there’s not a moral victory, but I think, when we see the big picture, we are doing some good things and our team is really growing.”

The team played their game as part of a ACU/SFA doubleheader after the men’s basketball game, and coach Goodenough that that increase in attendance really helped out the team. 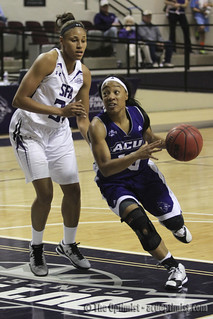 Junior Paris Webb drives to the basket in the second half.

“I thought we had a really nice crowd,” Goodenough said. “What an amazing day for ACU basketball in general. The men’s game’s crowd was phenomenal, it was so cool to have CBS Sports Network in here and we really appreciate the fans who left and ate lunch and came back for our game and it energizes the team so much to have the home crowd backing them. When we made big plays, the crowd would erupt and that’s a big deal, that’s part of the home court advantage.”

The team will play their next game against Sam Houston State in Moody Coliseum on Thursday, Jan. 22 at 7 p.m.

You are here: Home / Sports / Wildcats fall to SFA in overtime