Brittney Reed, the lone and leading senior for the women’s tennis team, was selected as the Southland Conference’s Women’s Tennis Player of the Week.

Reed is the second Wildcat to win the award in three weeks after her total 4-0 victories in singles and doubles after matches against Prairie View A&M University and Trinity University. This is not the first time she has received this award, though. As a freshman, Reed received the Lone Star Conference Player of the Week honors, back when ACU was in Div. II. 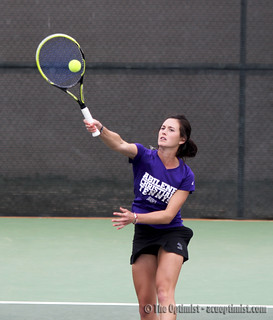 “I was happy to receive this award again, because it shows that my hard work on and off the court is paying off,” Reed said.

Her wide success in her career at ACU have proven to be nothing short of her hard work and dedication to the team.

Anyone who knows Brittney, knows she is dedicated and will do whatever it takes to be a leader. She shows true leadership skills on and off of the court.

“I have had the best time here at ACU,” Reed said. “One of my most major successes was becoming and All-American my sophomore year. I work very hard during the year, and that was an awesome way of being recognized for my efforts.”

Reed also likes to strengthen and improve her overall health as an athlete aside from focusing on her skills. These interests and hobbies fall into a goal that she will pursue and work toward for the rest of her life.

“My health is very important to me,” she said. “I strive to eat healthy and stay active throughout the week. Tennis keeps me quite busy, but living healthy is a lifestyle that I have chosen, and when I graduate I will continually pursue that.”

Her passion for tennis started at the age of 8 by the influence of her father who has a love for the game of tennis. Reed’s father signed her up for her first tennis camp, and from there, she was able to fall in love with the game as she kept pursuing her passion.

“My school didn’t offer tennis, so I played at one of the local public high schools,” Reed said. “I played on the high school team for one year, winning state as a freshman. I decided to focus more on USTA tournaments and to get my ranking up before deciding which college to attend.”

As Reed enters her last season at ACU, she said she hopes to leave a legacy that will inspire her teammates and viewers who have followed her throughout her journey.

“I hope to show them how to lead a team on and off the court, just as those have who were older than me,” she said. “I want to be an example of someone who is a fighter and one who lives and plays with the spirit of God inside.”

BREAKING: Effective immediately and in accordance with CDC guidelines, masks are optional for fully vaccinated individuals on campus, except for in classrooms. Campus guests will not be required to wear face coverings.