You are here: Home / Sports / Wildcats’ winning streak snapped in loss to UNO 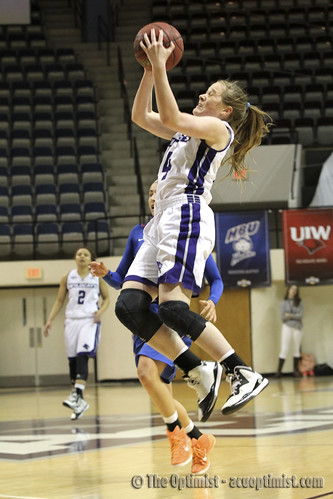 The Wildcats, who fell to 8-8 in the Southland conference and 16-11 overall, maintain their place at eighth in the conference.

The Privateers, who, with the win, improved their conference record on the season to 4-12, were led by freshman guard Randi Brown in their victory over the Wildcats.

The team began the season 0-9 and held the bottom spot in conference for most of the season, but has rallied recently, going 4-3 in its last seven games. Brown, who has reached double digits in each of her last six games, recorded 27 points against the Wildcats and forced seven of ACU’s 31 turnovers. This, combined with her 27-point performance Feb. 26 against Nicholls, helped her earn the Southland Conference Women’s Basketball Player of the Week honor.

The Wildcats’ highest lead was just four points, which they reached 2:21 into the game on a three-pointer by junior guard Whitney West, who was the team’s highest scorer with 12 points in 30 minutes.

That lead would dwindle, and just 2:59 later, with 14:40 left in the first half, on a three-pointer by the aforementioned Brown, the Wildcats would lose the lead for the rest of the game.

Turnovers and fundamental mistakes played a large role in ACU’s loss to the New Orleans team. At seventh in the conference in turnovers, the Wildcats, who averaged 18.0 turnovers before the game, managed to commit 31 against the Privateers, which tied for their highest mark of the season – a mark they hit Jan. 11 when they lost 63-39 to Nicholls.

The Wildcats have not won a game this season when they committed more than 21 turnovers, going 0-5 in such games.

Though the team thrives on threes and rebounding, it struggled with both Saturday. ACU has two of the best three-point shooters in the conference in West and sophomore guard Alexis Mason, but the team’s three-point shooting against UNO was just 4-21 from behind the arc.

The team also has three of the best rebounders in the conference in sophomores Sydney Shelstead, and twins Lizzy and Suzzy Dimba, but managed just 37, the team’s lowest number of boards since grabbing 36 against Central Arkansas Jan. 4.

At 16-11, the Wildcats have guaranteed a winning record with only two games left in the season. The Wildcats’ next game is Wednesday, March 5 at the 2-14 University of the Incarnate Word at 6 p.m.

You are here: Home / Sports / Wildcats’ winning streak snapped in loss to UNO