With a 19-7 singles record over the season and a perfect 5-0 record versus Southland opponents, sophomore tennis player Nico Agritelley earned his first All-Conference First Team award. The decision came last week from the Southland Conference.

The Laurel Springs Academy alum went 6-0 competing at the No. 2 spot this season and finished the year on a seven-match win streak.

Agritelly hasn’t lost a match since March 15 to No. 9 Texas A&M University’s A.J. Catanzariti, the best streak for any player on the team this season.

The honor is Nico’s first since he was named to the All-Conference Second Team last season as a singles and doubles player with junior Jason Proctor.

“Last year, winning Second Team All-Conference and as a freshman, that was a big deal, so going into this season, it was kind of a goal to reach even higher and achieve something even better,” Agritelley said. “That’s what I did when I reached my goal.” 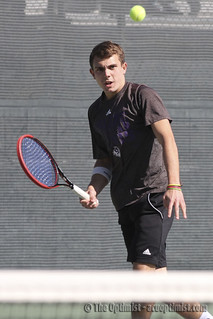 With the level of Southland opponents, Agritelley said he had to be more diligent in his practice and effort toward learning the game if he wanted to get into the conversation of the conference’s six best players.

“I just practiced hard every day,” Agritelley he said. “Even if the day’s a little rough or you’re not enjoying practice, instead of tanking or not focusing, it’s just about staying focused, giving everything you’ve got and putting it all out there every day at practice, so when the match time comes around, I’m mentally sharp.”

“It’s cool,” Agritelley said. “They’re all really good players, and that really shows the level of tennis that I was playing throughout the season. That shows that I’m up there and I was the best line three in the Southland Conference so, not to sound cocky, but I was playing good tennis and I was on my game.”

Agritelley gives a lot of credit to coaches for helping him do as well as he has this season and as well as helping every player on the team become better over the course of the year.

“The coaches have just been so supportive,” he said. “They’ve been lot more hands-on and personal, which I really feel helped us out a lot.”

Agritelley said he thinks the team is headed in the right direction, though each team member has their differences.

“My game’s a little different than everybody else’s; I’m not typical,” he said. “But they’ve been supportive, and I’ve just been producing results. They’ve been trying to work with me and help my game style out instead of trying to change how I play. They’ve been working with me and what I do, improving what I’m already good at and also improving my weaknesses at the same time.”

After earning his spot with Proctor last season, and as the only Wildcat to receive recognition on either All-Conference team this season, Agritelley said he hopes to use this experience to make his teammates better next season and hopes they do the same.

“Hopefully, they look at me and – I don’t want to say that they get jealous or anything – use it as motivation and it inspires them to drive and work harder so they can get similar recognition,” Agritelley said.” Hopefully it helps them and their drive, and they don’t take it in a negative manner, but encourage me and keep trying to do the same so the future freshmen Wildcats will aspire to do as well.”

Despite a team record of 10-16 and a 1-4 Southland record this year – compared to a 17-10 overall record and a 5-1 conference record last season – Agritelley said this year made the team better and more familiar as a unit.

“I had fun and enjoyed it,” Agritelley said. “We didn’t do nearly as well as we did last year, but I feel like the team’s a lot closer this year. The team felt kind of separated last year, and I mean, we were close, but not nearly as close as we are this year and so everyone’s better friends, and I feel like that really helped us.”

Enrollment for the spring 2021 semester is uncertain, even with the increase in university enrollment for the fall 2020 semester. While overall enrollment increased, the incoming freshman class is significantly smaller than in recent years, with total freshman enrollment at 839 students. “There’...
View on Facebook
·Share