You are here: Home / Features / Competing for the Cup: Gomez tries out for spot on Colombian National Soccer team

From the day she was born, she had Colombian blood running in her veins and a soccer ball at her feet.

Sophomore midfielder Maria Gomez, who finished her second season playing for the ACU women’s soccer team last semester, also just finished training in the Republic of Colombia for the chance to represent her country at the 2015 Women’s World Cup.

Born in Cali, Colombia, but raised for most of her life in the United States, Maria was invited to compete with 24 women for three weeks in her home country which would decide who made the team as they prepared for the upcoming World Cup in Canada.

The team made its World Cup debut in 2011 with terrible result but has seen success lately under head coach Felipe Taborda. Last year, the team earned a second-place finish in last year’s Copa AmÃ©rica Femenina tournament.

But that doesn’t mean the 19-year-old Wildcat can’t compete against the older, professional women players of Colombia. 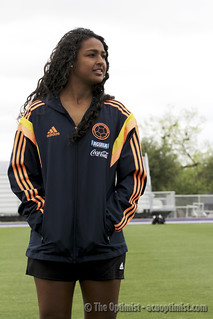 “About a year and a half ago, when I went to my first training camp in Colombia, was when I first realized I could play at that higher level,” Maria said. “I played with the women there, and it was very competitive, but I was definitely there. I was keeping up, I was at their level and I knew I could keep competing.”

After competing in the U.S. and at ACU, Maria found the sport and training to be disparate down south, which allows her to use the skills she’s learned here and combine them with what she learned abroad.

“There’s a big difference between American soccer and Latin American soccer,” Maria said. “In Latin America, they do a lot of technical work with their foot skills and focus a little bit less on fitness, so I can get my fitness and my physical aspects here with weight lifting, the amount of running that we do and the fitness tests that we have, and I can put it into work over there when I get the chance.”

After training and overcoming struggles with the altitude of Colombia’s capital city, BogotÃ¡, which sits 8,660 feet above sea level, Maria was able to show she could keep up with these nationally acclaimed players.

“They’re definitely disciplined in Colombia at the professional level,” Maria said. “They know a lot about the game, and so do the coaches. Everyone is a professional there. They’ve been to the Olympics before; they’ve been to the World Cup before, so they have a lot of experience behind them, and if you mess up or something, they’ll help you. They’ll teach you, and they’ll just show you how to be.”

After she returned to the states in March, Maria could only wait to find out if she’d been selected to return to Colombia to tryout for the team in April and hope her name was on the final list. But it wasn’t.

Maria didn’t return to the country she spent the first four years of her life. She didn’t play for the Republic where her father and her uncle both played professionally as goalkeepers, where her father was part of the U-20 National Team in 1987. And she won’t go to the World Cup.

But that’s only fueling Maria for the next round.

“Not making it will just make me push harder and work harder,” she said. “While they’re in the World Cup, while they’re in the training camps right now, I’ll still be here, doing the same thing – working hard so I can get better and better, even better than I was this time, and hopefully get invited to camp for the 2016 Summer Olympics and the 2019 France World Cup. After this World Cup, knowing that I won’t be there, I’m committed to getting there for those two.”

Maria said she can’t wait for her next opportunity to show she can compete for her country, where she really feels like herself.

“I absolutely love my country so much,” Maria said. “The music, the dancing, the food and everyone’s personalities, it makes me feel at home. I know I was raised here in the U.S. and grew up here for basically my entire life, but I go back to Colombia, and it feels like a sense of me is reestablished. Every time I go, the atmosphere, the culture, I just feel like it’s me.”

You are here: Home / Features / Competing for the Cup: Gomez tries out for spot on Colombian National Soccer team

Despite concerns about overall enrollment numbers due to COVID-19, university enrollment has increased due to new online programs. Read more below: ...

Overall university enrollment increased despite concerns that students would not return due to the COVID-19 pandemic. The increase in enrollment is due to new online programs, according to Tamara Long, vice president for enrollment. ACU Online added 15 new online undergraduate programs this year and...
View on Facebook
·Share

Members of the Abilene community gathered together to walk across the Martin ... END_OF_DOCUMENT_TOKEN_TO_BE_REPLACED