In 2005, Chris Thomsen was hired as the head coach of the ACU football program and named Ken Collums his offensive coordinator.

Thomsen was brought in to turn around a program that had only won one conference championship since the glory days of the 1977 NAIA national championship team.

The team had failed to field a potent offense in the championship drought years, and Collums was tasked with the turnaround. The offense had not recorded a 3,000-yard passer in the new decade.

Collums laid the groundwork for an offensive overhaul in the 2005 season with the addition of former Tulane quarterback Billy Malone. Malone came in highly touted after being the No. 18 quarterback recruit in the nation coming out of high school according to Rivals.com.

The 22-year-old freshman struggled in his first season throwing for 1,749 yards on just a 54.8 completion percentage and a touchdown to interception ratio of 14-to-11.

“You look at 2005, Billy’s first rattle out of the box wasn’t great,” Collums said. “We threw a lot of interceptions, and it takes a quarterback about a year in the system to figure this thing out.”

After Malone’s departure, the team transitioned to Mitchell Gale. It was a rough transition in the first year but again developed at an exponential rate in his sophomore season. 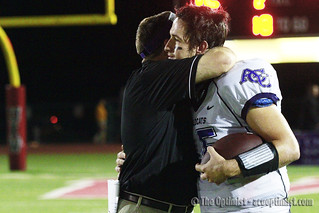 Coach Ken Collums congratulates quarterback Mitchell Gale after the victory over the University of the Incarnate Word. Gale threw for 409 yards in the game, pushing him to a career of 12,109 yards passing, becoming the LSC all-time leading passer.

Gale threw 1,709 yards and 10 touchdowns to seven interceptions in his first season. In 2010, Gale’s sophomore season, those numbers rose to 3,595 yards, 38 touchdowns with three interceptions.

“Guys always make a jump between year one and year two,” Collums said. “Mitchell showed John David Baker what that looked like to mature quickly.”

Gale finished his junior and senior years off with 6,805 yards with 49 touchdowns to just 16 interceptions. Malone and Gale joined a select group of quarterbacks who had back-to-back 12,000-yard careers (Houston: Kevin Kolb and Case Keenum, and Hawaii: Timmy Chang and Colt Brennan).

John David Baker did not have the luxury of a first year in the system, but he had four years of backing up an ACU all-time great.

Baker put together a single-season like no other, throwing for 3,376 yards, 35 touchdowns and rushing for five touchdowns, giving him an ACU record 40 total touchdowns. 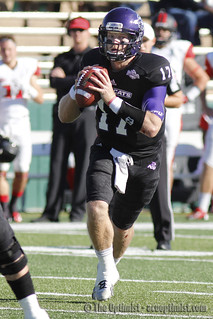 “It’s special,” Baker said. “Coming here in ’09, Billy had just finished his career, and that was the standard. Four years later, I follow up Mitchell. All I have ever known at ACU is that, if you play quarterback, you better be pretty dang good. Just to have my name mentioned with those guys is something I am proud of.”

Current starting redshirt junior Parker McKenzie has seen the benefits of waiting under star quarterbacks because he saw both Gale and Baker in action. In McKenzie’s first season, he also had Baker there to help as a graduate assistant. McKenzie earned second team all-Southland Conference honors for throwing for 3,084 yards and 22 touchdowns.

“It was a huge honor to be able to come in and do what the guys before me used to do,” McKenzie said.

Coach Collums said he looks forward to seeing the progression from McKenzie and his improvement from year one to year two.

“We haven’t seen Parker’s second year yet,” Collums said. “Are you going to improve on 3,000 yards and 22 touchdowns? Probably not. And we don’t talk in terms of production. From Billy on, we talked in terms of being a mailman, because the only time I notice my mailman is when my mail gets crossed up. I don’t want them to be the main man, I just want him to distribute the mail to the receivers.”

The next chapter of the ACU quarterback legacy is still being written. Coach Collums opened the starting job to redshirt freshmen Cody Ennis and Dallas Sealey, redshirt sophomore Kade Munden and the incumbent McKenzie.

“We don’t know yet how those other guys (Ennis, Sealey) are going to compete in a game outside of Kade Munden, and all he did in his start was beat Central Arkansas,” Collums said. “With these other two guys, in Cody Ennis and Dallas Sealey, they are fierce competitors and, they are getting after it.”