ACU is picked to finish 12th out of 13 teams in the conference, all of the players and coaches expect better.

The ACU volleyball team prepares to open its third season in the Southland Conference against Big-12 and Pac-12 powerhouses, Texas Christian University and Arizona University. The two games will be the first of many early season, tough non-conference matches.

The Wildcats return seven players from last year’s team, including senior outside hitter Jennie Loerch, who finished fifth in the conference in kills a season ago. 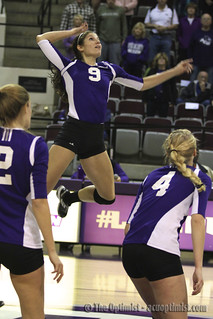 “We have more girls who can score than last year,” Bibler said. “We’ve got three freshmen front row players that’ll come in and be options for us, which will be really really helpful.”

Similar to last season, where the Wildcats played only one non-conference match at home, ACU will not play in Moody Coliseum until its second conference match of the year against Northwestern State on Oct. 1.

Bibler hopes this difficult road trip will prepare the team for whatever conference season brings.

“There’s no way we finish second from the bottom this year. Our girls have too much drive, too much grind, and they are going to be really really unsatisfied with that,” Bibler said.
Senior libero Madison Hoover, who led the team in digs last season, said the team chemistry is already better than last year.

“This team is unlike any other team I’ve played with since I was a freshman. I really love how everyone’s court presence is so strong and everyone is so competitive,” said Hoover. 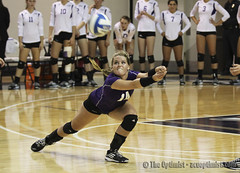 ng 24 matches a season ago, the Wildcats competed in a lot of close games. Hoover believes the team could have finished near the top of the conference.

“We really want to be able to finish games,” Hoover said. “We went to so many games, we took them to five and lost by just a few points and if we had won those games we would’ve been second in conference. So we’re really focusing on being able to finish and have that mindset that we’re going to win and just sweep them fast.”

Bibler said although this team has some lofty goals he is confident they can achieve them.

“It’s an uphill battle, and we’ve got to stick it to every team we play in conference,” Bibler said. “So that’s what we plan on doing. It’s easy to say, but harder to actually do it, but we plan on doing it.”

The Wildcats’ Western Athletic Conference tournament run and season came to a ... END_OF_DOCUMENT_TOKEN_TO_BE_REPLACED