You are here: Home / Sports / Football to face struggling ‘Jacks

ACU’s 2014 team took down the Lumberjacks in upset fashion, 37-35, endangering the ‘Jacks playoff hopes. However, SFA finished 8-4 with a good enough record to make the playoffs. The ‘Jacks will look for revenge to get back on track in a rough early 2015.

ACU comes off a decisive 49-21 victory over Houston Baptist, while the Lumberjacks enter on a 3-game skid. The ‘Jacks lost a heartbreaking opener to Northern Arizona, 34-28, followed by a tough blowout loss to the no. 3 ranked FBS team in the nation TCU, 70-7.

Last week, the ‘Jacks opened conference play with a 28-14 loss to conference leader McNeese State. The losses proved to be worse than just win-loss, as junior quarterback Zach Conque has struggled to stay healthy with a knee injury.

Despite a difficult opening to the season, the ‘Jacks should not be overlooked as they feature solid players at multiple positions. Conque has not put up the numbers he did in 2014, but he has completed 68.7 percent of his passes for 366 yards and one touchdown, while scoring two on the ground this season. 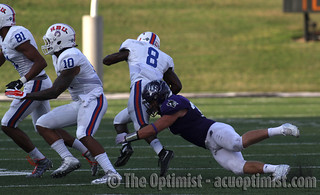 ACU head coach Ken Collums said the team should improve its run defense this week, especially after two embarrassing showings. The Wildcat defense gave up a combined 443 yards at a 5.9 yards per carry clip against Fresno State and Houston Baptist.

“On defense, we have to help our guys up front,” Collums said. “Our D-line played well, but out linebackers have play a little more aggressive and our safeties have to be a little more involved.”

The defense will need senior linebacker Lynn Grady and sophomores Sam Denmark and Bryson Gates to step up to the challenge this week.

Denmark leads the defense in tackles with 20, while Gates leads in tackles for loss with 2.0. On the defensive line, senior William Moore and sophomore Dylan Douglass are players to watch for as they have a sack each. The ‘Cats have recorded only three sacks so far this season struggling to replace Nick Richardson’s production from last year.

Quarterback Parker McKenzie and the offense will need to build on their performance against the Huskies last week. McKenzie threw for 225 yards, three touchdowns and no interceptions in the win. Senior wide outs Cedric Gilbert and Jonathan Epps combined for 145 yards receiving and three touchdowns.

You are here: Home / Sports / Football to face struggling ‘Jacks