You are here: Home / Sports / Securing your spot: McKenzie has opportunity to join elite group

Parker McKenzie knows the foot steps he is walking in this season. He has a year under his belt, but still has a lot to prove especially when you look at his predecessors’ resumes. 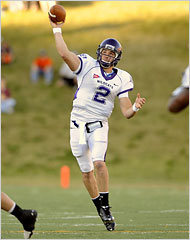 Quarterback Billy Malone helped lead the Wildcats back to the playoffs for the first time since 1977.

The list of accomplishments especially in the last decade are endless. Billy Malone (2005-2008) and Mitchell Gale (2009-2012) were back-to-back 12,000 yard plus passers. John David Baker (2013) broke the single-season total touchdown record in his lone season as a starter (40). Current starter, Parker McKenzie made the All-Southland Conference honorable mention squad as a sophomore in the team’s first official FCS season.

Quarterback John David Baker helped lead the Wildcats in their first season as Div. I members.

“ACU has two quarterbacks that passed for over 12,000 yards and then JD (John David Baker) had a phenomenal year,” McKenzie said. “I just came in and did my best for the team.”

The numbers are staggering to look at, but what is most impressive is the continuation of success from one quarterback to the next. ACU football fans see the articles and stats documenting this decade of offensive decadence, but they haven’t seen it broken down from each quarterback.

Head coach Ken Collums thinks that the quarterbacks should not be evaluated by the numbers they put up, but rather by efficiency.

“We don’t talk in terms of production,” Collums said. “We talked in terms of Billy, we say you are the mailman, just deliver the mail.”

To be fair to all the quarterbacks, ACU’s offensive numbers should be looked at on different levels based on strength of schedule. Malone and Gale played in Div. II Lone Star Conference, John David played at an FCS independent level and McKenzie on FCS Southland level. 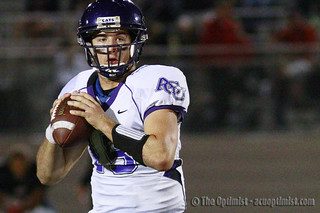 Quarterback Mitchell Gale became ACU’s all time leader in passing yards and joined an elite class with over 12,000 passing yards.

It should also be noted that McKenzie has yet to finish out his career and his numbers are based on just one season, just like Baker. Gale and Malone had to start from scratch in their freshman seasons. Their first seasons brought down their yards-per-game averages, making it an interesting breakdown.

The legacy that Parker McKenzie is facing entering the 2015 season has to weighing heavily. He already dealt with all the questions during his sophomore season being the first FCS starter for the Wildcats under Coach Collums, and he answered them. Then, in an open quarterback competition this offseason, McKenzie had to find a way to win the job back. It is fair to say that he has been through a lot to stay on track with his fellow ACU greats.

You are here: Home / Sports / Securing your spot: McKenzie has opportunity to join elite group

The Wildcats’ Western Athletic Conference tournament run and season came to a ... END_OF_DOCUMENT_TOKEN_TO_BE_REPLACED