You are here: Home / Sports / Wildcats get season started with trip to Fresno

The Wildcat’s football program kicks off its season Thursday night on the west coast. ACU will open up the year with the Fresno State Bulldogs. Kickoff is set for 7 p.m. Pacific Time and 9 p.m. Central Time. The game will be on the Mountain West Conference Network and the call can be heard in Abilene on 98.1 FM The Ticket.

“Everybody is fired up, we’re ready to go and get this season started,” head coach Ken Collums said. “We’re excited to get to go to Fresno and try to get a win.”

“I expect Parker to have a good opening game,” Collums said. “He’s done this before, he started last season on national T.V. in the Georgia Dome so I expect him to handle it well. Also be cause he has such a great cast around him. He has a lot of options and a lot of guys that he just has to get the ball in their area and they can make a play.” 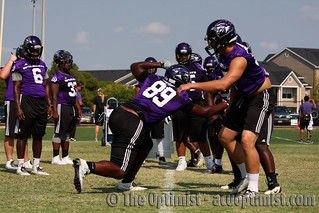 On defense, the Wildcats bring back five starters. Senior linebacker Lynn Grady (52 tackles and seven tackles for loss) and sophomore linebacker Sam Denmark (77 tackles, four tackles for loss and two interceptions) lead the ACU defense. Senior defensive back Keith Barnett, one of the Wildcat’s most valued defenders, will miss the season due to a torn ACL in his left knee suffered during the team’s first scrimmage of the season.

For the Bulldogs, sophomore Zack Greenlee will lead Fresno State at quarterback. Greenlee won the fall camp competition and went 18-of-41 passing for 213 yards and one touchdown, which was an 81-yard strike for the season, in which he started just one game. Senior running back Marteze Waller (1,368 rushing yards, 11 touchdowns, 97.7 rushing yards/game) and senior left tackle Alex Fifita were both selected to the 2015 pre-season all-Mountain West team.

The Bulldogs sport a youthful roster in 2015 where 65 players on the squad are either freshmen or sophomores. Senior outside linebacker Eliro Edraine has recorded 29.0 tackles for a loss over the last two seasons, which was the second-most of any Mountain West defender in that time.

The last time ACU faced Fresno State was in 1963, when the Wildcats edged the Bulldogs, 32-29. Originally, ACU was scheduled to play Fresno State on Nov. 23, 1963, but the game was delayed after President John F. Kennedy was assassinated in Dallas on Nov. 22, 1963. The Wildcats learned of the Kennedy assassination Friday afternoon while in Phoenix on a re-fueling stop of their charter flight to Fresno. The flight resumed to Fresno, where the next morning coaches and officials from the two schools met and decided not to play.

You are here: Home / Sports / Wildcats get season started with trip to Fresno

Members of the Abilene community gathered together to walk across the Martin ... END_OF_DOCUMENT_TOKEN_TO_BE_REPLACED