You are here: Home / Features / 100 and Counting: Wilson reaches milestone in memorable season

Women’s soccer head Coach Casey Wilson won his 100th game at the helm of the program on Sunday against McNeese State. The double overtime, instant classic saw ACU win 3-2 and continued its dominance against the conference.

“I knew it was coming up, but I also wasn’t really focused on it and I don’t necessarily ever think that the wins are mine,” Wilson said. “The wins are the girls and the programs wins, and we’ll (coaching staff) take the loses, because its the coaches job to own the loses. I wanna say it’s more of an accomplishment for the program than it is for me.”

Wilson grew up playing soccer his whole life. His love for the game transitioned onto another field, as he took a placekicker position on the football team at Central Michigan. But he wasn’t done there.

During his junior year, he came to Abilene Christian and became a student-athlete. But he wasn’t on the soccer team, and he wasn’t on the football team. This time, he would try his hand at baseball. Wilson played baseball in high school at Anaheim Hills, California. He played two years for head coach Britt Bonneau and the Wildcats’ baseball program before graduating in 1999. He was a .300 hitter during his senior year. 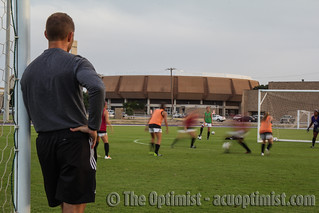 Wilson left Abilene though after graduating, but returned to make his second stint at ACU in 2002. He was hired on in 2004 as an assistant coach for the softball program. It only took two years before ACU offered him a head coaching job. But once again, he would shift sports.

“It was a start up back in 2007,” Wilson said. “We started with three scholarships and it was just a building process each year. We received a slight increase in scholarships every year.”

Coach Wilson also continues on to credit the coaches that have come through the years and players he has coached for building the program up.

“We have continued to grow and get stronger and build some momentum with this program and how we have played,” Wilson said. “I have to give a lot of credit to the people that have helped me here along this process, specifically, my assistants that I have had through these years. All of those guys have been a key on the development of this program and without them, a lot of this wouldn’t have been possible, so I owe a lot of success to the people I have surrounded myself with here over the years.”

This year, the Wildcats are second in the conference with a 6-1-1 record. With such a unique combination of youth and experience, Wilson has had to balance the tricky dilemma of who to use, whether new or old, and when to use them.

“Every year is a different team,” Wilson said. “One of the things about this year’s team is that this is the second straight year were we have had a lot of new players and we had a tough schedule. As we went through that tough schedule, I think that it was tough for us to initially develop confidence that we see now. I’m not necessarily surprised that we are doing so well right now, it was a matter of time before we started to gel and we have been playing good soccer here for the last month and hopefully we continue to head in the right direction over the next couple of weeks.”

You are here: Home / Features / 100 and Counting: Wilson reaches milestone in memorable season

The Wildcats’ Western Athletic Conference tournament run and season came to a ... END_OF_DOCUMENT_TOKEN_TO_BE_REPLACED