You are here: Home / Features / Ahead of the Pack: Freshmen Standouts Boost ACU Soccer

It’s not supposed to happen like this. This isn’t how it’s supposed to go. To be this young and this good, already, it just doesn’t happen. Not everyday at least.

That’s the case for two members of the women’s soccer squad. Freshmen Dylan Owens and Sophie Standifer have quickly proven that success does not always require patience. 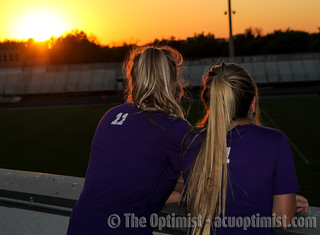 “It means a lot as a freshman,” Owens said. “Usually it’s something you would expect for the older girls, but now, we’re looking at playing a lot of time.”

The forward duo leads ACU in several offensive categories. They are second and third in points and shots and tied for first in goals and assists. The two have combined for six goals and 44 shots. In conference, Owens is among the leaders in points with eight and goals with three.

Most of her success she credits to her teammates, emphasizing the fact that she’s just doing her job.

“My accomplishments have really been set up by other people around me,” Owens said. “I think most people in this conference could finish plays that have been set up for me. Sophie is the one who is more of taking it in, dribbling around 10 people and scoring. Mine is more of Lindsey Jones making a beautiful pass to me and I just have to tap it in.”

Although humble, Owens’ description may be a tad off. Against Northwestern State, she was able to steal the ball in the early minutes of the game and score on a one-on-one matchup at Elmer Gray Stadium. 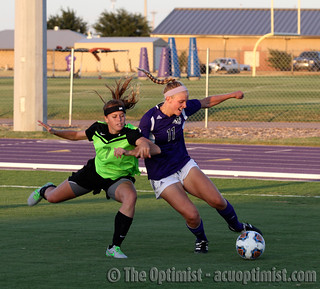 Dylan Owens fights for possession against UNT earlier this season

“I was hyped for that game,” Owens said. “It was the first game for my parents to see me at ACU. It meant a lot.”

Both players have been tossed into the starting rotation for the Wildcats and have been forced to play the majority of minutes. Standifer has started all but the opening two games of the season, while Owens has recently found her place as a starter.

“I kind of got thrown into it earlier on, especially playing against the bigger schools that were intimidating,” Standifer said. “I had to adjust so that now, playing conference games, I feel better than when we played bigger school like Texas or A&M.”

“I feel like I started out a little more rough,” Owens said. “But I’m starting to gel and gain more confidence. Against the tougher teams, I felt like I was a little kid, playing against older girls. But now, I feel confident that I can compete with them.”

The Wildcats have a well-established balance of youth and experience this season. With a talented freshmen class, Owens and Standifer have taken no time in standing out, as head coach Casey Wilson has given them both a heavier load of the offense.

“Coach talked to me and told me that he wanted me to start playing more, which is always good to hear,” Owens said. “It’s also intimidating because I have a lot more on my shoulders now. I feel like since he and the team have confidence in me, that I should be confident in myself and my abilities.”

Standifer credits her offseason work to Wilson’s trust in her.

Both athletes came to ACU after distinguished high school careers. Owens, from Willard High School in Missouri, scored 136 goals, including 47 as a senior. She also was voted to first-team all-district as well.

For Standifer, the Southlake native was a two-year captain and led Liberty Christian in scoring her junior and senior years. She also helped lead her team to a state quarterfinal appearance in 2012. 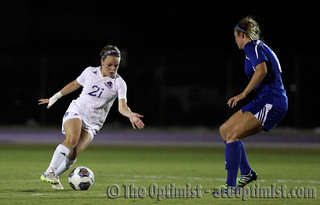 Their roads to ACU are unique, but ultimately, the atmosphere on campus is what drove the final decision.

“Ultimately, it came down to a school that was either ten minutes away from home, or ten hours away,” Owens said. “I always wanted to go somewhere new and exciting. Then my senior year, I really wanted to stay close to my family. But once I made the trip to Abilene, I just fell in love with it and felt that ACU was where I needed to be.”

Standifer’s road to Abilene was a bit different. After tearing her ACL in her senior year, the decision became finding a college that she wanted to go to, even without soccer.

“I looked at a ton of different colleges, public, private, christian, just different ones,” Standifer said. “I remembered my visit to ACU, which I visited before my injury, and thought that this would be a great school to go to even if I couldn’t play soccer. So ultimately, the school that I would have gone to, to play soccer, is the same school I would have gone to if I couldn’t have played soccer.”

With ACU soccer at 4-1-1 and sitting second in the Southland Conference, it’s no question that the two have been a big part of the team’s success. With three years left, both want nothing more than to continue the Wildcat’s tradition of success and perhaps get some new jewelry along the way.

“We want a ring,” Standifer said. “I think it will happen, whether it’s this year or next year or the year after that. I believe it’ll happen. That’s the end goal.”

You are here: Home / Features / Ahead of the Pack: Freshmen Standouts Boost ACU Soccer

BREAKING | Southland conference soccer and volleyball teams will postpone their seasons until Sept. 1. Teams will have the discretion to play non-conference competition prior to the conference portion of the schedules.

BREAKING | The 2020 Southland football season will proceed as scheduled. Each school is expected to decide whether fans will be allowed to attend, says commissioner Tom Burnett.

The Senior Leadership Team canceled all study abroad programs for the fall semester amid a growing number of cases of COVID-19 across the nation. Nearly 30 students were expected to travel abroad and have been notified of the cancellations. Stephen Shewmaker, Executive Director of ACU Study Abroad,....
View on Facebook
·Share

Members of the Abilene community gathered together to walk across the Martin ... END_OF_DOCUMENT_TOKEN_TO_BE_REPLACED