You are here: Home / Features / Going Home: Collums returns to Conway for showdown with alma mater

“The biggest thing about Conway growing up was they had this great water slide,” Collums said. “And as a kid, you know ‘hey, let’s go to Conway and ride the water slide’. I mean, that was our thing. So growing up, I always had fond feelings and memories for Arkansas.” 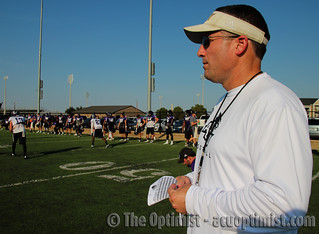 Conway, Arkansas had always been good to Collums. After all, it’s where he attended college, got his start on a football coaching staff and, perhaps most importantly, met his wife, Robyn.

But this weekend, for the first time, Collums will return to the home of that great slide with so many great memories, not as a native son, but as a foreign conqueror. This weekend, the head coach of the ACU Wildcat’s football team will lead his squad into battle against his alma mater, the University of Central Arkansas.

“This time, it’ll be weird, but it’ll be a different weird. Because I’ve already coached against them,” Collums said. “I’ve already been the enemy, but now the problem is I’m going into a place where I invested a bunch in that place. I sat in classes there, I know people there, I know people who run that place and now, I’m going in as the enemy.”

Although it is the first time Collums will coach against the Bears in Conway, it is not the first time where he has had to line up on the opposite side of the field against them. The Wildcats faced the Bears last season on a neutral field in Plano. Led by an offensive run game and key defensive plays, the Wildcats shocked the Bears and the Southland Conference with a win against a UCA team who had won four of their last five games and had hopes of being conference champions.

“Last year was very strange, it was a weird deal all week in preparing to play against UCA, preparing to coach against your former team,” Collums said. “I spent 12 years there. So that was very strange for me. There is a different feel to this week, because not only are they a really good football program, but now I’m coaching against my old team on my old field.”

One of the most

emotional moments from the game, and perhaps all of last season, came late in the game. The Wildcats ran the ball into the end zone for a touchdown to make it 52-35 Wildcats with a little more than two minutes left in the game. There would be no comeback, the game belonged to ACU.

Collums, standing on the sideline in the final seconds, called his wife over from the stands to have her join him on the field. Robyn made her way to him and tapped him on the shoulder. He turned, and without saying a word, wrapped his arms around her for a hug that said everything it needed to.

“When you play against a school where you helped build and helped get them to where they are, and I don’t deserve much credit, but it’s like you helped create this monster, and now you’re having to face it,” Collums said. “That was an emotional deal. We have a lot of friends in Conway, and I just needed a hug. It was over. We won. And no matter what the outcome was, it was going to be over, there was going to be relief, but it was great to win that game.”

Collums returns to Conway as the enemy, which couldn’t be further from the truth for the former Bear. Collums played his first down as quarterback for Central Arkansas in 1991 and remained the starter for the next three years. He helped lead the Bears to a national championship in his freshman year, recorded a 30-8-3 overall record and threw for 5,578 yards and 39 touchdowns. His senior year, he put up career highs in completion percentage (58 percent) and touchdowns (13).

But, with Central Arkansas being one of the premier teams in the National Association of Intercollegiate Athletes (NAIA) and already having a quarterback, the chances Collums would start early were slim to none. But sometimes, all it takes is an opportunity. An injury to the starting quarterback made Collums the new UCA starter overnight. that I was the starting quarterback so early was a shock,” Collums said. “That was a well-established program when I got there, they had it going on, so it wasn’t a deal where I came in and saved the day. It was more of I just came in and did what they needed me to do and we had a lot of success. At times, I did pretty well, but I had a great defense and a great running back to help me.”

From 1995 to 2005, Collums moved up the coaching lader, starting as an assistant for UCA a year after graduation, to spending two years at ACU as quarterbacks and receivers coach, to returning to Arkansas as the Bears offensive coordinator. But a call from former ACU head football coach Chris Thomsen would shake things up for Collums and his plans.

“When I was the offensive coordinator at UCA, he (Thomsen) was my offensive line coach, and we had talked for years about what it would look like if we got to run our own program and how we would do it differently and how we would stand out from any other program in the country,” Collums said. “I just didn’t know it was going to be here at ACU. He called me up when he was the head coach here and really recruited me hard, which I was really hesitant about.”

The two went back and forth until finally, Collums decided to go for it.

“It was a weird situation, because I wanted to work with Chris, but when he told me he was taking the job in Abilene, it was sad because I’m thinking ‘I’m not leaving UCA for ACU’. This (Arkansas) is my happy place, this is where I want to be. But about a week later, my thinking went from ‘why in the world would I leave?’ to ‘why would I not go?’ You’ve got two coaches in me and Chris who are as like-minded as they come and here’s our chance to change the face of ACU football into what we’ve always talked about.”

The two would go on to change the face of ACU football. But now, it’s not about what Collums has done for ACU. It’s not about the success and the recent history. This Saturday, in Conway, Arkansas, facing the UCA Bears, it’s about a football game and trying to stay perfect in conference for the Wildcats against a tough opponent.

“For three hours, it won’t matter,” Collums said. “It’s football. It’s eleven-on-eleven and you’re winning the game. But up until then, it’ll be weird. But it’s all about the three hour game.”

You are here: Home / Features / Going Home: Collums returns to Conway for showdown with alma mater