You are here: Home / Features / Goodenough makes ACU home in her fourth season

Born in Haskell, Texas, women’s basketball coach Julie Goodenough says that she got into coaching basketball because of her father. He coached her brother’s third grade basketball team and let her participate as a first grader. Her drive for the game continued as a player for the University of Texas-Arlington.

“I loved it, it is my passion,” Goodenough said. “Basketball and studying, I was kind of a big nerd, so I studied all the time, and when I wasn’t studying, I was playing basketball.”

Teaching has always been something that has come naturally to Goodenough and since her biggest passion is basketball, it just made sense to put the two together and coach.

After college, Goodenough got her first collegiate coaching job at Hardin Simmons from 1993-2002, where she compiled a 188-54 record, leaving the program as the winningest coach in HSU’s history and was inducted into the Hardin Simmons University Hall of Fame in 2007. 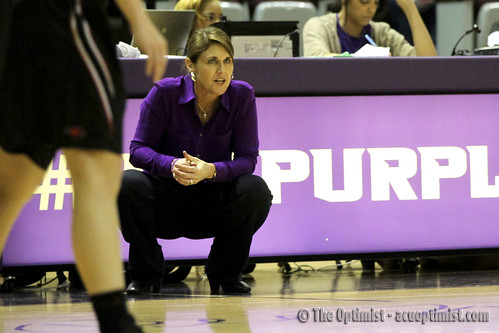 After 2002, Goodenough left to take the head coaching job at Oklahoma State University, where she would stay for three seasons and collect a 23-61 record there. In 2006, Goodenough went to Charleston Southern for six seasons and went 78-105, registering two of the four winning seasons in Charleston Southern’s history. But after time in Oklahoma and South Carolina, she really began to miss home.

With most of her family in Texas and the desire to have her daughters experience high-school football and UIL sports in Texas, she began to watch for jobs to open up in Texas.

She began talking with former athletic director Jared Mosley about the coaching job at ACU. Since ACU was Div. II at the time, Goodenough didn’t want to backtrack since she was already coaching at the Div. I level. Mosley convinced her that ACU was going to make the move to Div. I soon and that she would only have to coach at the Div. II level for one year before the move up.

“Just the opportunity to be at a first class university like ACU, where the success is overwhelming within the athletic department, to be close to my family, back in Texas, to continue coaching Div. I, and in a christian atmosphere, it was just the total package to accept the job at ACU,” Goodenough said.

The women’s basketball team starts the season off Nov. 14 against Wayland Baptist University. This will be Goodenough’s fourth season at ACU and 21st season overall. Since her arrival, ACU has gone 56-31 and has posted a lifetime 345-251 overall record in her career so far.

“Since I have been here at ACU, this is the first team that has had more returners than newcomers,” Goodenough said. “So our preseason and practices up to this point have been more at a higher intensity, they have been more competitive, we have put in more material up to this point than we have been able to these previous three seasons, just because we have a great nucleus of returners.”

Goodenough said the team goal is to win the Southland Conference championship, but “it is going to be really really hard, but that is our expectation.”

You are here: Home / Features / Goodenough makes ACU home in her fourth season

The Wildcats’ Western Athletic Conference tournament run and season came to a ... END_OF_DOCUMENT_TOKEN_TO_BE_REPLACED