You are here: Home / Features / Making His Mark: Denmark’s big hits gets him big recognition

The opposing quarterback calls out the play as players on both sides of the ball move into position. Denmark sees everything around him and plans out his attack. He calls out the defensive play and prepares the defense for what looks like a run. The ball is snapped. It’s a fake hand off. The quarterback keeps it and gains two yards before looking up to see the full on sprint of Denmark.

Before he can react, Denmark wraps him up and brings him to the ground for the tackle. Denmark leaps up and gives one of his signature celebrations that brings the ACU faithful to their feet. 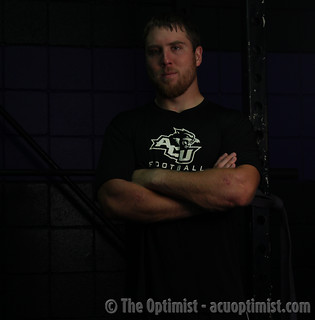 This is just one of the many plays the Wildcats have been accustomed to Denmark capitalizing on. As the Southland Conference’s leading tackler, sophomore linebacker Sam Denmark has become one of the anchors of this ACU defense in only his second year on the team.

“The biggest thing for me this year is a growing understanding of the defense,” Denmark said. “Last year, I’d go out there and I knew what I was doing, but I didn’t know what was going on around me all the time. Knowing this year what everyone’s job is and how we all come together has been huge.”

Huge is right. In just four games, Denmark has become one of the elite linebackers in the conference. Against Stephen F. Austin, Denmark put together an 18-tackle performance on the way to ACU’s 35-32 win. He followed it up the next week with a career-high 21 tackles against Central Arkansas.

To put it into perspective, Denmark’s 40 solo tackles on the season are 12 higher than the 28 tackles put together by Myke Tavarres of Incarnate Word, who ranks second in the conference and also has an extra game under his belt this year. Denmark’s 59 total tackles are nine higher than second placed Garrett Dolan of Houston Baptist who once again, has five games played, compared to four by Denmark.

“Our defensive scheme allows the linebackers to fly around out there and make tackles,” Denmark said. “It gives us a lot of freedom to make plays and do what we need to.”

Denmark put together several memorable games with highlight moments that made him stand out as a freshman. This year however, Denmark believes he has made the jump to the next level as one of the leaders on the defense.

“Last year, I was able to be successful because of the older guys on the team,” Denmark said. “Justin Stephens, Lyn Grady, without them, I would have been so lost. We have Lyn back this year with (Travis) Tarver and playing along those guys makes everything so easy and allows me to be successful. But those seniors last year really helped me realize what being a linebacker for ACU football is really all about.” 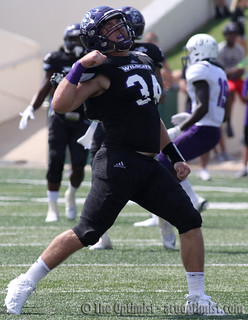 an may not recognize Denmark by his jersey number 34 on his back. But he often can be identified as the player who is all over the field running in every direction imaginable. For Denmark, he’d have it no other way.

“I’m definitely a defensive guy,” Denmark said. “All of high school I had to play both ways, but if it was up to me, I would have loved to play on just defense. I love being on defense because you get to be around the ball all the time and you’re the one getting to do the hitting. I was never a fan of being hit on offense, but I love getting to hit guys on defense. I believe that I was made to be a linebacker.”

That belief was born at an early age. As a kid in school, the native from Las Cruces, New Mexico tried several sports, but knew what his calling was.

“Football has always been big in my family,” Denmark said. “When I was young, like in elementary school, I was the kid who played soccer, t-ball and everything, but I always knew I wanted to play football. As soon as I was able to put the pads on in fifth grade, I was ready to play and I haven’t stopped since.”

The linebacker position has always been an extremely valuable position for the Wildcats. It’s served as the leaders of the defense and requires a high-level of football intelligence to be executed correctly.

“Every player on the defense is important,” Denmark said. “As a linebacker, you’ve got to sit back and fill the hole and do it all. Stop the run. Stop the pass. Do whatever the coach asks of you. It’s a big deal. You have to lead the defense and get people in the right position.”

With several teams in the Southland that pride themselves on offensive success, Denmark wants to make it clear that the ACU defense is elite and that leading the league in tackles is only the beginning.

“Each team in the conference is top tier so I have to be sure to bring my game every week,” Denmark said. “But that’s what I’m about. My goal individually is to be the best linebacker in the Southland. I feel like I’m on my way to being there and I only want to be better.”

You are here: Home / Features / Making His Mark: Denmark’s big hits gets him big recognition

The Wildcats’ Western Athletic Conference tournament run and season came to a ... END_OF_DOCUMENT_TOKEN_TO_BE_REPLACED