You are here: Home / Features / Put the Hurt On: Nursing Major Pummels Offenses

At 6’1″ and 290 pounds, Josh Bloom does not strike most people as the prototypical nurse in training. In fact, if anything, he may remind most as a bodyguard or club bouncer.

But looks can be misleading, as the ACU football defensive tackle and nursing major spends most of his time tackling and sending opponents to the sideline, but also has the ability to bandage them up.

“I spend the first six or seven months of the semester wearing pads and hitting people, hurting people, and then after that I go put on scrubs and go to the hospital and care for people,” Bloom said. “It’s definitely something that you have to know when to flip the switch, but it has been a pretty good experience.”

Born in Kingwood, Bloom’s parents introduced him to athletics at just four-years-old when he tried out many different sports, but ultimately football was the one that stuck.

“I liked the physicality of it, I liked hitting people and being aggressive,” Bloom said. “Because I mean, you could not do that in baseball or basketball to that degree without getting in trouble, so football was the way to go.” 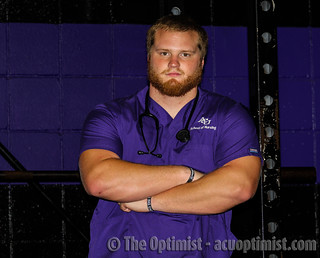 Bloom credits a hospital visit as a freshman in high school with his desire to become a nurse.

“I had an emergency appendectomy, had my appendix removed and a few weeks later had developed some complications and had a really bad infection that kept me in the hospital for over a month and I lost over 80 pounds,” Bloom said. “So it was just real teary and weathered and the people that kept me motivated and kept me up and excited everyday to get up and do things were my nurses. Just seeing that, the way they impacted me, the choice was pretty simple from there, I wanted to help people and to do it in that profession. There was no other choice.”

Several universities around the country have established nursing programs, the question for Bloom became, “where can I go where I can learn to be a great nurse, but also get to be a great football player?”

“When I was getting recruited, Coach (Ken) Collums was the only coach out of all the coaches that recruited me that didn’t talk about football,” Bloom said. “He talked about my development as a man and as a father, husband, and I mean that is just so new and different. You normally don’t hear that with recruiting trips and I just came here and fell in love with the campus, fell in love with the people and it was pretty clear cut from there.”

Now in his fourth year with the Wildcats, Bloom has grown as a player, but also as a nurse. And to top it off, Bloom also has spent the past few years on the track and field team for ACU, participating in the shot put.

“I have done a lot, I have traveled a lot to cool places,” Bloom said. “My first time on a plane happened when we traveled for a game for football, so that is something that sticks out. All the things we get to do, all the places we have been, the teams we have faced, the overall atmosphere of the college level of playing is just totally different from anything else. It’s been a really good ride.”

You are here: Home / Features / Put the Hurt On: Nursing Major Pummels Offenses

Members of the Abilene community gathered together to walk across the Martin ... END_OF_DOCUMENT_TOKEN_TO_BE_REPLACED