You are here: Home / Features / Staying on Par: Carpenter battles injuries in return to men’s golf

On June 26, 2014, Luke Carpenter had surgery to repair the torn hip labrum on his left side, which required six months of recovery. His next surgery the next December was for the same issue, this time on his right side. The second surgery came with another six months on the sidelines.

After more than a year of recovery, Carpenter’s long journey back to the ACU men’s golf team is coming to fruition.

A Little Rock, Ark. native, Carpenter won three golf state championships and graduated from Arkansas Baptist High School in 2011. He followed up his high school success with an equally impressive freshman campaign at ACU that included a Lone Star Conference honorable mention and a ninth-place finish at the Lone Star Conference Championship with a three-over-par (219) in 2012.

Then came the health issues. 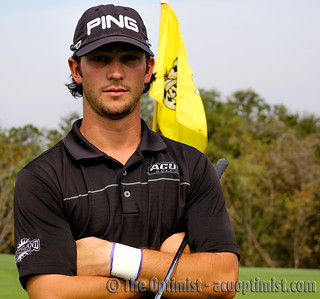 “When I came out of high school, I was playing great and freshman year I played great, but then in sophomore year, something wasn’t right, and junior year, it was worse,” Carpenter said. “At that point it was just a lot of ice and ibuprofen, but when I figured out that I needed surgery, that explained a lot and I was bummed. At the same time, I was pumped to get it taken care of, get healthy and then be the player I was and get even better.”

But for Luke Carpenter, the process would be much longer and drawn out than simple surgeries and getting back out on the course.

“It was so hard. For a year, you’re out and you’re just dreaming about the day you get back,” Carpenter said. “You get back and expect yourself to be getting it done, but you have to be so patient. There was a two-to-three month period where I was frustrated, but at the same time, I had to remind myself every day that I had to give myself time. I’ve just learned that as a golfer, you beat the crap out of your body, and things are going to happen sometimes, you can’t control them.”

Now that Carpenter is back playing golf on a regular and healthy pace, he’s still adjusting to playing at the Div. 1 level and to the best of his own ability, which has come with its own difficulties.

“Course management, that’s been the hardest part,” Carpenter said. “The swing came back pretty quick, but decision-making and distance control was hard. Before surgery, I was weak and in pain and I couldn’t really hit anything full, so I came back and everything was going so much further, and I had to adapt to that and figure it out.”

In the year Carpenter spent away from golf, he missed the opportunity to compete for head coach Tom Shaw, who was in his first year coaching ACU golf. Now, both are catching up for lost time, building the rapport that comes from coach and player.

“I like what I see,” Shaw said. “I think Luke is encouraged now by where his game is at and he wants to get better and that kind of drive, that initiative, makes coaching a lot easier.”

The team also received a lot of new faces, whether freshmen or college transfers. Carpenter believes that he can not only make great relationships with them, but also has the ability to lead.

“It’s been cool to get to know them,” Carpenter said. “I definitely looked forward to it and it has definitely been fun to be able to be with them on the course. That’s what you want in a college team. You want depth; you want to be able to push your top guys. With a deep team like this, and especially with having really good freshmen coming in, you want to get out there and prove yourself.”

The battle to step back onto the green has been difficult, to say the least. But looking back, Carpenter realizes he didn’t do it alone.

“Sometimes, one of my traits on the golf course is being overaggressive, so being patient, and letting the course come to me and just letting things happen has been a huge lesson for me,” Carpenter said. “Doing a lot of quiet time stuff and reading scriptures, I was able to find things that help me relax and not put so much pressure on myself to come back and be right on top of things. I’ve learned that if I can work hard and others see hard work and dedication through me, and the love for God, then I’m doing my part.”

You are here: Home / Features / Staying on Par: Carpenter battles injuries in return to men’s golf

The Wildcats’ Western Athletic Conference tournament run and season came to a ... END_OF_DOCUMENT_TOKEN_TO_BE_REPLACED