The Southland Conference championships are this weekend for ACU’s cross country teams, with both the men and women traveling to Huntsville to face off against the 13 other universities in the Southland.

This time last year, several factors were weighing against both teams. But what a difference a year can make. The women’s team has dominated every meet they’ve entered, quickly climbing the ranks to being one of the top teams in conference.

All season we’ve heard about junior Allie Hackett and the season she’s had. Hackett has earned three Southland Conference Athlete of the week awards this season, claimed several top place finishes and led this women’s team to multiple top overall titles. All of this has culminated into this one weekend where Hackett could run in the biggest race of her life.

Of course, the entire women’s team has stepped up this season, with both freshmen Aubrey Till and Carnley Graham proving they can run with the big dogs. Junior Diana Garcia-Munoz has had the pressure taken off of her being the only top runner on the women’s side to now having all seven of her teammates at or near the caliber she’s been at. 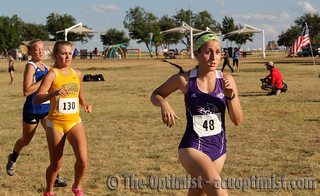 Allie’s twin sister, Michaela Hackett, is at the level she was at this time last year, which was still crazy fast. Sophomore Gabby Thompson has struggled this season with injuries, but will push through and complete one last race for the season.

Fellow sophomore and teammate, Bella Gutierrez has, like all her other teammates, had a stellar season with several personal bests this season.

The women’s team has only one senior, Spain native Marina Guerrero. Guerrero is mainly a middle distance runner, with her specialty in the 800, but she can still run the 5k distance of cross-country with no issues. She’s helped the Wildcats finish on top this season, and will continue to do so as she prepares for her final collegiate cross-country race.

The men’s team has two seniors, one of which is preparing for his final meet of his collegiate career as well.

Senior Daniel Block has taken leadership over the men’s team for the last two years. He’s finished as the top runner for the men all season, clocking personal records throughout his races. Block will graduate this December and head back to his hometown of Dalmeny, Saskatchen, officially ending his outstanding career with ACU.

Taylor Ochs, known as T.O. to his teammates, will also be competing in his final cross race of his career, though he will be back in the spring competing with the track team.

Both runners have given their all to their team, running through injuries, coaching changes and other unforeseen issues that come with running. Though the men’s team isn’t expected to do as well as the women’s side, that doesn’t mean Block and Ochs, along with their other six teammates, are counting themselves out. Underdog stories happen all the time in the realm of competitive running.

Now, as a fan or spectator, it’s easy to forget how much of a key role coaches play in the sport of running. Coaches make the workouts, plan the recovery period and make sure their runners are preforming at the level they should be. Track head coach, Keith Barnier oversees all of the track and field along with the cross-country athletes. This puts him in charge of over 40 athletes who all have different ways of training. After the accident that left former distance head coach, Drew Graham, in a wheelchair, Barnier handed over the rains to now assistant head coach, Ray Walker.

Walker has gone through the transition period of not really knowing how to deal with athletes on such broad spectrums in regards to running ability, to now having athletes separated by merely a few seconds. As a coach, this is what dream teams are made of. Both the men and women’s team have a bond close enough to have them acting like family but competitive enough to allow them to want to be better than the top runner.

Another thing Walker has done that many don’t know is not only does he plan the workouts daily, but he also runs them with his athletes. He does the same grueling workouts his runners do and sometimes he’ll do two-a-days as he is also in the middle of pre-season training for the track team.

The teams have improved for several reasons with the biggest factor being the coaching they have access to. As the Southland Conference championships are now just three days away, all the athletes can do now is trust in their training.

The women’s team will be looking to do what no team has yet to do since the school’s transition into Div. I and that’s claim a conference championship. Many may overlook the men’s team, but that doesn’t mean they’ve started to overlook themselves.

Friday is the culmination of this whole season, with the Southland Conference meet starting at 8 a.m. for the women with the men following immediately after. I’m no fortune teller nor can I see into the future, but I wouldn’t be surprised if a new trophy is added on Friday to the plethora the cross team has acquired this season.

The Wildcats’ Western Athletic Conference tournament run and season came to a ... END_OF_DOCUMENT_TOKEN_TO_BE_REPLACED