The Wildcat’s hopes of a conference championship took a step backward Sunday afternoon, as ACU, winners of five straight, drew a 2-2 tie with Sam Houston State at Elmer Gray Stadium.

ACU will have to win out it’s remaining two games of the schedule if it wants to claim a conference title. The Wildcats host SFA on Tuesday in a game that was originally set to be played last Friday, but was rescheduled due to the inclement weather Abilene experienced.

Stephen F. Austin is 45-1-3 in conference since the 2011 season and has not lost a game since the conference opener in 2013. ACU’s season finale is against Incarnate Word at home on Friday.

The Wildcats will need help however, as they’ll need to win their remaining games and have Ladyjacks lose their finale against Sam Houston State, and have the defending tournament champion Huskies go winless against Lamar and Texas A&M-Corpus Christi in order to claim the regular-season championship. 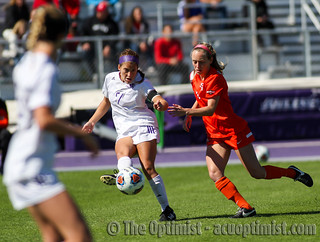 The Wildcats trailed for just the second time over their last six games, as an early Bearkat goal put ACU down 1-0 in the 12th minute. The score would hold up until halftime.

ACU finally got on the board with a pair of goals in the 70th and 72nd minutes from redshirt sophomore Kate Seay and freshman Dylan Owens. Seay got the Wildcats going with a shot from 10-yards out that got past the SHSU goalie for her fourth goal of the year to tie things up. Sophomore Megan Bear was credited with the assist.

Two minutes later, one of ACU’s most reliable players, Owens, pushed the home squad ahead after a shot was deflected off a Bearkat defender and landed right in front of the freshman.

With ten minutes left, ACU led 2-1 and looked to have its sixth straight win in the bag. After taking the possession away from SHSU, ACU passed back towards its own goal, but had the pass intercepted by the Bearkats. SHSU split both junior Kelsie Roberts and sophomore Chantal Kinsey and found the back of the goal for the equalizer at the 82nd minute mark.

Kinsey, who has been excellent for ACU all season long, left the game with what appeared to be a possible ACL injury. Kinsey will see a doctor Monday for an evaluation.

The score would hold into overtime and remained 2-2 after 110 minutes of play, settling the game in a tie.

The Bearkats snap the Wildcats streak of five straight wins and gives them the second tie in conference play, with the last coming in the opener against Texas A&M-Corpus Christi.

ACU doubled the Bearkats shot output (26-13) and led in corner kicks (9-1). SHSU was led by the play of goalkeeper Kylie Hambleton, who finished with a season-high 11 saves. Junior goalkeeper Sydney Newton had five saves. She’s allowed six goals over ACU’s past three games.

Senior Lindsey Jones led all players with six shots for the game. Junior Maria Gomez and Owens each added five shots. With the three points against SHSU, Owens leads ACU with 16 points in conference play, which also ranks third overall in the Southland.

The Wildcats look to SFA on Tuesday at 3 p.m. where ACU must win in hopes of keeping their conference championship dreams alive.

The Wildcats’ Western Athletic Conference tournament run and season came to a ... END_OF_DOCUMENT_TOKEN_TO_BE_REPLACED