After coming up short the last two seasons, the Wildcat’s upset the UTSA Roadrunners 79-60 in regular season non-conference play.

“I feel like it’s just natural, I’ve been putting up extra shots every day,” Mason said. “I feel like me taking those extra shots a day is just helping me get a feel for the ball and so when it comes to me I know I can knock that shot down.”

UTSA outscored ACU 23-19 in the third period to cut the lead to six at 57-51 and regained a bit of momentum heading into the fourth quarter. The Wildcats wasted no time getting going, as they scored the first seven points of the quarter to push the lead to 13.

“I was really proud of our defensive effort,” head coach Julie Goodenough said. “You know in the fourth quarter both teams are a little bit winded a little bit fatigued, and so their shots were off somewhat and our players continued playing hard, contesting shots, blocking out and getting rebounds.” 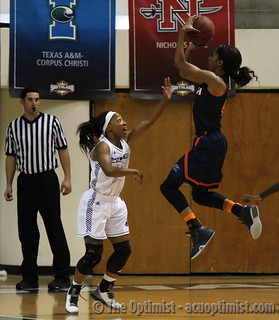 The effort in the fourth quarter by the Wildcats helped them to an 8-5 advantage in steals for the game and forced UTSA to a 23-65 (35.4%) shooting performance.

The Roadrunners ended the 7-0 run with just over six minutes to play, cutting the lead 11. However, Mason responded with an acrobatic fall away jumper as the shot clock expired, and pushed the lead to 66-53.

“That’s not a shot I practice at all. We don’t shoot pull ups and so I heard the bench calling down the shot clock so I just chunked it up and hoped it went in,” Mason said.

The margin would be brought back to 11 one more time before ACU ended the game on a 13-5 run to earn its first win over UTSA in their last three matchups.

The Wildcats never trailed in the game thanks to a quick 13-4 run to start the game and were only tied for 54 seconds total.

Junior Lizzy Dimba fell just one rebound shy of a double-double with 10 points and nine boards, while senior Whitney West Swinford added 17 points on 7-12 shooting to fuel the Wildcats early in the game.

ACU (2-1) continues its three-game holiday home stand on Monday when they take on University of the Southwest Mustangs (2-3). USW is 0-1 when visiting the Key City, as men’s basketball beat the Mustangs 94-63 in season opening action.

The Wildcats’ Western Athletic Conference tournament run and season came to a ... END_OF_DOCUMENT_TOKEN_TO_BE_REPLACED