You are here: Home / Features / Miss Everything: Williams proves talents across the board

Whitney Williams has a drive that is matched by few.

From being a Div. I tennis player to competing in the 2012 Arctic Winter Games to being the Miss Alaska Teen USA 2014, when Williams puts her mind to something, she does it.

Born in Alexandria, Louisiana, sophomore Whitney Williams began her tennis career as a four-year-old. Her mom, Stephanie, put her into a tennis program to give her something to do. Like most things, Williams proved to be a quick learner and a natural.

“Apparently my first day playing tennis as a four year old, I just kept making balls over the net and I’ve loved it from the beginning and just stuck with it,” Williams said. 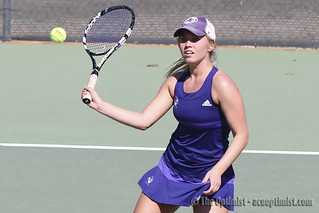 After living in Louisiana for 14 years, Williams and her family moved north in every sense of the word. The family made the over 4,000 mile trip to Anchorage, Alaska where she spent her high school years. The move affected her reasoning for coming back to the area for her college career.

“For college, I really wanted to get back to the South and the warm weather to play college tennis,” Williams said. “Abilene is for sure where I’m supposed to be. Just the people and the team, the atmosphere, the small town feeling, it all really pulled me in to come here.”

Being a jack of all trades and a self-proclaimed competitive person, Williams’ tennis experience allowed her to be involved in the 2012 Arctic Winter Games in Whitehorse, Yukon, Canada. She came within one match of going into the final round of the badminton tournament, despite just four days of prior practice.

“Other coaches from, like, Greenland, kept asking me how long I had been playing, and I was like, ‘uhh, four days,’ and that was a lot of fun,” Whitney said.

Where she really found her stride was in an environment outside of the tennis court. With support from her friends and family, specifically by her younger sister, she decided to take up pageantry and compete for the Miss Alaska Teen USA title.

“I originally wasn’t going to do it, because it was so far out of my comfort zone, but for some reason, I changed my mind and I did it,” Williams said. “I trained really hard to get my body fit and I practiced interview questions to be ready and all that hard work really paid off and I won.”

Williams took first in the competition in 2013 and continued pageantry in 2014.

Learning her competitive nature from her family, Williams said that she felt pressured when she was younger to be the best that she could be, but now welcomes that challenge.

“I am a very competitive person and I think it’s genetic. My family is one of the most competitive families that you could meet,” Williams said.

“For a while, it was very stressful because when the people in my family want to do something or be something, they’re going to do it, and they’re going to do it first class and to the best of their ability. When I was younger, I didn’t really understand that, so I felt a lot of pressure, but as I’ve gotten older, I’ve learned that my family wants me to succeed for myself. They want the best for me, and I thank them for that.”

Whitney said that her goals in the future are to be All-American in tennis at ACU, graduate from ACU and work towards her goal of being Miss Alaska USA. She aims to complete her master’s degree, but focuses most on her main career aspiration of being a college tennis coach and being able to help students like herself.

“I just know the impact that my coaches have made in my life and seeing something in me to be better and when I see that potential in someone else, I just want to share the amount of intelligence that I have with tennis with them,” Williams said. “I can share what I know with them to help them get better, because I really enjoy seeing people improve and get better through that.”

You are here: Home / Features / Miss Everything: Williams proves talents across the board