You are here: Home / Features / Turn Things Around: Serbian Native Looks to Shine for Wildcats

Not many people are given a chance to play Div. I sports. Out of all the high school athletes in the nation, only five percent go on to play college sports, according to the NCAA. Junior guard Jovan Crnic was given several offers, however, after his second year at Northern Oklahoma College in Tonkawa, Oklahoma.

Crnic, originally from Nis, Serbia, averaged 11.5 points, 3.8 rebounds and 4.2 assists per game last season for the Mavericks, before making the jump to Div.I with ACU.

“I was at Northern Oklahoma College and needed two years,” Crnic said. “After those two years, I was at a Regional Tournament and coach Solomon Bozeman started talking to me and he was the first coaches that hit me up at ACU.” 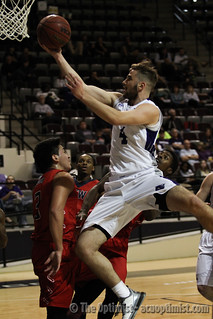 For Jovan Crnic, ACU was not the only university calling his name. Other well established programs had ambitions of getting the 6-foot-5 athletic guard on their team. Ultimately, ACU stood apart from the pack for Crnic.

“There were several other offers like Mississippi State, Oral Roberts, Tennessee Tech, Idaho State, and this one school in Hawaii, because thats where I was for high school,” Crnic said. “CU was actually my first visit. I came here and I had my other ones set up, but I saw the campus, experienced the atmosphere, got to see what these people here are all about and so I cancelled all my other visits and just committed to ACU and was just excited to come here.”

A lot of people might suggest that Crnic was too eager with his decision, but he’s looked right at home in ACU’s two games this season. In his Wildcat debut, Crnic was one of five ACU players to score in double digits with 15 points on 5-10 shooting. He also added a team-high five assists, three rebounds and a steal.

One of the main factors that made the transition for Crnic to ACU was the Wildcat’s trip to Costa Rica. The team was able to get in several additional practices over the summer. With that extra time, it allowed Crnic more time to find his role with the team and show everyone what he could bring to the table.

“I have been here now for five months already, because of the summer, and we had a unique experience,” Crnic said. “The basketball team gets to do once every four years: we went to Costa Rica and it started off pretty well. We worked hard the whole summer and have been working hard ever since. With the season starting, it is getting kind of hectic and crazy with school and basketball, but thats why we are here. We enjoy the process and it has been a great experience.” 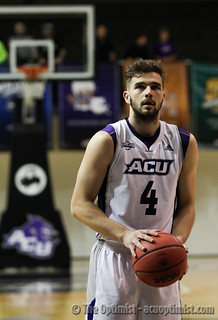 one of the biggest pulls ACU had on him was the level of competition he would face as a member of the Wildcats.

“I look forward to honestly, probably all the trips that we will be taking with the rest of my team and especially some of them when we go play teams like Nebraska, TCU, Drake, and Colorado St. and places like that,” Crnic said. “Playing in those arenas with a bunch of people watching, is something that I haven’t really experienced yet. We work really hard, but those are the moments that we live for I guess, and we are expecting to, looking forward to, and hoping to get some wins this year.

The past two seasons have not been kind to the Wildcats. In the transition of becoming a core member of the Southland Conference, the Wildcats have won just 21 games over the last couple of years. For Crnic, he believes he and the rest of the new faces for ACU can begin to reverse that negative trend.

“Coming into this program, I have heard about a lot of loses last year and everything, but that is what we are here for,” Crnic said. “We are here to try and get things turned around for this program, so wins and more challenges, the people and coaches are what I am looking forward to the most.”

For Crnic, his own personal goal is simple and easy to remember: winning.

“It might sound basic and cheesy, but my goal and the team’s goal is to win as much as possible,” Crnic said. “They did have kind of a bad record last year, but we are trying to get to the breaking point and get things turned around here at ACU.”

You are here: Home / Features / Turn Things Around: Serbian Native Looks to Shine for Wildcats

The Wildcats’ Western Athletic Conference tournament run and season came to a ... END_OF_DOCUMENT_TOKEN_TO_BE_REPLACED