You are here: Home / Sports / Volleyball makes huge leap in 2015

Second-year head coach Jason Bibler said this season was another big step in the right direction for the Wildcats.

“Next year will just be another step in that process,” Bibler said. “Hopefully it can be kind of like this year, a big step instead of a little step, as we get ready for winning the conference tournament in 2017.” 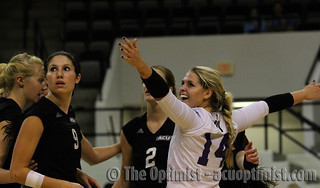 Although ACU started out 0-14 to start the season and it seemed fans were in for another long conference season, the Wildcats found new life on Oct. 1 in Moody Coliseum.

Not only did ACU get their first win of the season, but they swept Northwestern State 3-0 in what was the start of an impressive home stand. The team went on to win three of their next four at home, with their only loss coming in a five-set thriller against Stephen F. Austin where Hoover recorded a career-high 38 digs.

“This year truly set a high standard for ACU volleyball and I am so proud of the hard work everyone put it,” senior libero Madison Hoover said. “It would have been really easy to give up after our preseason but that motivated us to work harder.”

After the 4-1 homestand, ACU ran into more road struggles, losing a tough five-set match at Houston Baptist and 3-1 against the eventual conference champion Texas A&M Corpus Christi. The Wildcats returned home and continued to find solitude in Moody, defeating New Orleans and sweeping Southeastern Louisana, but were tripped up by Nicholls State on senior night.

Sitting at 6-5 the Wildcats headed to the road for a season-ending five-match road trip. ACU started off with wins over Incarnate Word and McNeese State, but lost in rematches against SFA and Nicholls, before finishing with an exciting 3-2 win over Northwestern State to finish at 9-7. 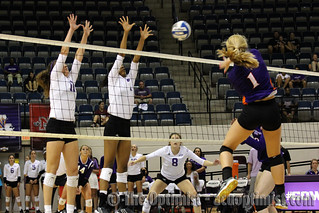 Senior Jennie Loerch played a big part in the offensive attack all year for the Wildcats, but really stepped up the last three games of the season delivering a 57 kills, including a career-high 24 against Nicholls.

Loerch also recorded a 21-kill performance against Northwestern State, which clinched fourth place in the Southland, a performance she described as “beast mode”.

“Well I knew that Sarah [Siemens] was going to set me, because I had entered into beast mode and she knew it,” Loerch said. “We have this telepathic connection. Sometimes you just get into that zone and you know nobody can hold you.”

Hoover finishes second all-time with 1,742 digs and Loerch became just the tenth Wildcat in ACU history to eclipse 1,200 kills, however, both players acknowledged how crucial their teammates were along the way.

“I am so thankful and honored to be on the second team,” Hoover said. However, I couldn’t have gotten that award if it wasn’t for my teammates. Especially Jen [Loerch] and Goose [Siemens]. They motivated me throughout the entire season when I really didn’t think I had anymore to give.”

ACU volleyball now sets it sights on 2016, its final year of ineligibility, and filling the positions left vacant by seniors Loerch, Hoover, and Sarah Siemens.

“You don’t ever replace players, but ideally you’ve recruited girls younger than the seniors already to kind of just take a step forward. The next man up kind of mentality,” Bibler said.

The team will return 11 players next year and welcome as many seven new faces to the team.

You are here: Home / Sports / Volleyball makes huge leap in 2015

The Wildcats’ Western Athletic Conference tournament run and season came to a ... END_OF_DOCUMENT_TOKEN_TO_BE_REPLACED