They don’t care about the past.

Freshmen men’s basketball athletes Jaylen Franklin and Jaren Lewis usher in a youthful excitement for the Wildcats, with their athleticism, winning history and drive to succeed have many taking note. 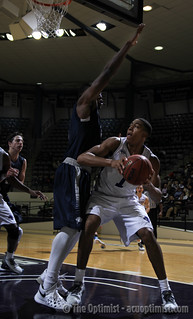 And they’ve only played eight games.

“Making the jump from high school to college, no matter where you played, is tough. You’re not going to come in and all of the sudden be the man,” Lewis said. “It’s a process. Me and J-Frank have spent a ton of time in the gym putting up shots, and I think that extra work has helped us a lot so far.”

Franklin leads the Wildcats in scoring (13.7 points/game) and is shooting at a 51 percent clip, which is remarkable for a freshman.

In his collegiate debut, Lewis did his best stat-stuffer impersonation, recording 18 points (8-10 FG), nine rebounds, four assists, three steals and a block en route to ACU’s 94-63 win over the University of the Southwest. Since then, he’s averaged 9.3 points per contest, a team-high 6.9 rebounds while shooting 46 percent.

“I think it is a little bit of a shock to see these two play at this level with only a few practices and even fewer games under their belts,” head coach Joe Golding said. “I think the Costa Rica trip and all the extra practices we got from that helped them immensely.”

If you look at the background of Jare and J-Frank (as they like to be called), their high level of competition is easily explained.

Franklin spent four years at Parkview High School in Arkansas where he quickly established a name for himself. The four-time all-conference player and three-time all-region selection helped Parkview to two state championships, including a first-place finish at the prestigious Whataburger Tournament in Fort Worth.

As a senior he put up 18.7 points, five rebounds, 6.4 assists and 2.2 steals per game. Franklin never failed to average double-digit points during high school. 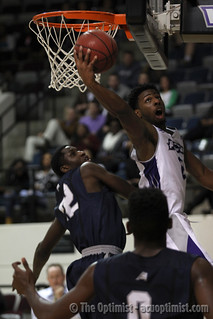 with teams and leagues that offer some of the best competition in the nation,” Golding said. “They’ve played with teammates that are off at major programs around the country. They’re not afraid to play at a high level, they believe they deserve to compete with the best and quite frankly, you need guys like that if you’re going to be successful.”

Coming from one of the top schools in Florida, Lewis matched Franklin’s two state championships with two of his own. Lewis led Lake Highlands Prep to back-to-back Class 4A state championships as a sophomore and junior. His 6-foot-6, 210 lbs. frame gives him extreme flexibility on the court, playing everything from the two, three, four and even, at times, point guard.

“Long term, we’d like to see him play the small forward position for us,” Golding said. “That’s an extremely important position in this league when you think of the (Stephen F. Austin’s) Thomas Walkups of the conference. Having someone who can work inside and out, pass and shoot, defend and rebound, someone who can do it all is huge.”

Lewis averaged 20 points and 10 rebounds a game over four years at Lake Highlands Prep, and 24 points and 13 rebounds per game his senior year, earning the Class 4A first team all-state selection and the district’s Player of the Year award.

SOMETHING’S GOT TO CHANGE

Franklin and Lewis share one common goal, a goal that drove them to ACU and something they believe in every time they step on the court in Moody: legacy.

“When we both got here, we talked a lot about what this program has been through over the past few seasons,” Franklin said. “I know that things have been rough with moving to Div. I, but we’re ready to change that. We believed that if we could get a lot of talented guys here, that we could really set something up that could be special. I know the fans are disappointed from last year, but I’m ready to stop hearing about the turnover and start hearing about the turnaround they see in basketball.”

That mindset is what has fans talking about when it comes to ACU basketball. It’s no secret that the program has been less than superb since the move to the Southland. From injuries to star players, to off-the-court disciplinary issues and roster turnover, it’s been rough for the team to move in the right direction.

“Sometimes you’re presented with situations where players do something that doesn’t really leave you with a lot of options as a coaching staff,” Golding said. “But I’ll say this, anytime you are trying to change the culture of something, whether in athletics or business or anything, and make it better, you’re going to have turnover from people who don’t buy in.”

Since the 2011-2012 season, two-thirds of all men’s basketball athletes have stayed for one season. After that, whether it be transfer, removal or personal decision, most have chosen not to return as a Wildcat. This has forced the coaching staff to bring in a huge overhaul of junior college players over the years, limiting their true incoming freshmen classes.

Franklin and Lewis represent a freshman class of eight true freshmen, with four red-shirting this season. In addition, Golding announced two freshmen for next year’s squad, one of which is a 6-foot-11 center from San Angelo. What does that tell fans and the community? ACU could become very competitive, very soon. 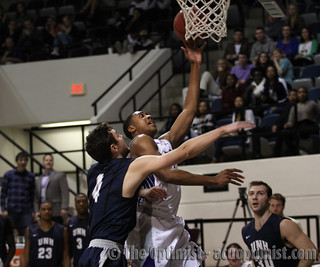 “Coach was preaching to us about what we can do if we all buy in and trust what we’re working for,” Franklin said. “It’s definitely a process. We’ve had some rough first halves in our home games, some tough games on the road, but the Colorado game really proved what we can do. From that, it’s only given us confidence in our ability if we compete.”

The Wildcats 108-100 double overtime loss to Colorado State proved that ACU is headed in that direction. With these two flying up and down the court, bringing a level of athleticism and excitement to Abilene, a long with show-time dunks, it looks like they’ll stay in that direction of progression.

“This program hasn’t seen much over the last few years,” Lewis said. “One of the big selling points was that we could be the first group to really do something special since the move to Div. I. We just want to win, to be honest.”

Lewis, while he may not get as much attention as Franklin, has given the Wildcats a much needed do-it-all man. He is second on the team at 8.9 points per game and is ACU’s top rebounder with 5.7 boards per game. Over the course of five games from Dec. 20 to Jan. 9, Lewis averaged 14.6 points while shooting at a red-hot 78 percent from the field. His most remarkable moment in his young ACU career came on Feb. 27 when he hit a half-court buzzer beater against New Orleans University to give the Wildcats the win, 87-84. Lewis scored 13 points, grabbed five rebounds and recorded two steals in the comeback win.

The Wildcats’ Western Athletic Conference tournament run and season came to a ... END_OF_DOCUMENT_TOKEN_TO_BE_REPLACED