Freshman point guard Jaylen Franklin came as close as you can get to actually carrying a basketball team on your back in the Wildcats 75-67 win over the Cowboys Tuesday night. Franklin scored a career-high 29 points and scored 15 straight points over the course of five minutes in the second half to take over the game.

The win moves the Wildcats to 3-2 in conference and 8-10 overall. ACU also now owns a 6-2 home record and have won three of their last five.

Franklin played all but five minutes of the game and in addition to being nearly unstoppable offensively, he was very active in the passing lanes. Franklin recorded six steals, also a career high, of ACU’s seven takeaways from the night.

“Going through warm ups, I felt like I was very loose,” Franklin said. “Going into the game, coach told us to get a couple of steals, and he kept telling me to get steals through the game. So I figured I better listen to him.” 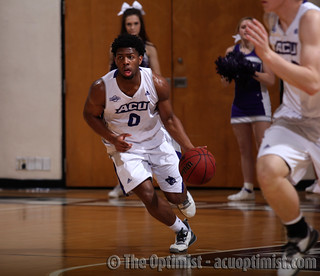 Offensively, Franklin converted 11 of 15 shots against the Cowboys and went 7-11 from the free throw line. The freshman also distributed the ball well, finishing with a game-high four assists.

The win moves ACU over .500 in conference and shows the team’s ability to move on. After a 97-62 beat down at the hands of Stephen F. Austin Saturday night, the Wildcats returned home to Abilene and controlled the outcome of their game with McNeese State.

“Give SFA credit, they’re a great team coached by a great coach and that’s what they do,” head coach Joe Golding said. “One of the biggest differences in this team as compared to past teams is that we’ve got four seniors who are true leaders. They make this team go and are the soul of this team. They help this team turn the page after tough losses and get everyone focused on what’s next. It’s really hard to come back, even with a home game, from a loss like that, but it shows the character of this team when we’re able to do what we did tonight.”

The score was close for all of the first half, with neither team able to build much of a lead. With the scorer knotted at 21 a piece, senior Duran Porter would register one of his three dunks on the game to move ACU ahead. Junior Jovan Crnic, who was excellent off the bench, drilled a three to put the Wildcats up 26-22 with just over three minutes left in the first half.

Freshman Jaren Lewis hit a jumper off a pass from Franklin in the final seconds of the first half to make it 30-24 ACU at halftime.

Lewis started the second half the same way he ended the first: with a score. He, along with Franklin, scored the first 13 points for ACU of the second half. The points came in a variety of ways: layups, contested jumpers and efficient shooting from the charity stripe. Lewis ended with 12 points, 10 in the second half, and five rebounds, in a game that could have seen him be the star, had it not been for the heroics of Franklin.

ACU led 49-44 at the 10:12 mark before Franklin put on a show. Over the next five plus minutes, he made a living at blowing by defenders on one-on-one dribble penetrations, scoring on several contested layups and sinking free throw after free throw. After scoring on eight of ACU’s ten straight possessions, Crnic converted a pair of free throws to take a little of the scoring load, making it 64-57 Wildcats with 3:41 to go. 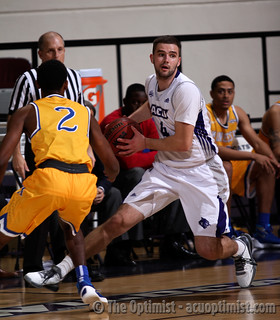 get a bucket, that’s all I was thinking about in that moment,” Franklin said. “I was in the zone and I definitely felt like I couldn’t be stopped. Coach kept calling my number and the ball just fell tonight.”

The nail in the coffin came when the Wildcats rushed the ball up the court to beat the Cowboys’ late game press. Crnic took the ball, drove the lane and found Porter on the backside with a no-look behind-the-back pass who dunked it home with under a minute to play.

Crnic turned in seven points, four assists and was 4-4 from the free throw line in 21 minutes off the bench. Porter scored 10 points, with most of that coming in the first half, and grabbed five boards and a block. Senior guard Parker Wentz finished with 9 points on a rough shooting game, going 1-5 from deep.

McNeese State, now 3-12 overall and 1-4 in conference, was led by junior guard Jamaya Burr. Burr went 6-10 from the floor and 8-10 from the line for 21 points, in addition to eight rebounds for the 6-foot-0 guard. Bigman Craig McFerrin nearly had a double-double for the Cowboys, as he ended with 12 points and nine rebounds. Four McNeese State players ended in double-digits, compared to ACU’s three.

The Wildcats look ahead to back-to-back road games on the slate. ACU will face Incarnate Word in San Antonio on Saturday, followed by a show down with conference powerhouse Sam Houston State on Monday in Huntsville.

The Wildcats’ Western Athletic Conference tournament run and season came to a ... END_OF_DOCUMENT_TOKEN_TO_BE_REPLACED