You are here: Home / Features / From touchdowns to timed starts: Epps transition to the track

Whistles and yells echo from the field. Small orange cones mark every 10-15 yards. The sounds of shoes hitting the ground become a subtle background noise.

All of these noises and sights are no different for senior wide receiver Jonathan Epps. The only difference is instead of football pads, he’s now in track spikes and rather than big players in a secondary running after him, he now has slender, toned teammates running with him.

Epps has eased into the track and field world quite smoothly. It helps having a track background, but it also helps that he’s just naturally quick.

In his final football season with ACU, Epps had 464 receiving yards and earned second team all-Southland Conference at punt return and 2015 return specialist.

At 5-feet-9-inch, 170 lbs., the New Orleans native is a little stockier than most sprinters, but that doesn’t mean he’s counting himself out.

“I’m really competitive and I know I haven’t done track in a while but I always believe in myself,” Epps said, “I have to remind myself I’m not doing it to get personal records every time out, but to prepare myself for football.” 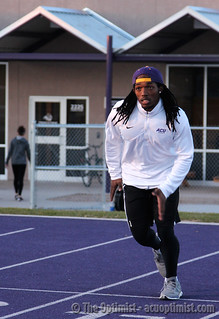 As random as it may look to the outside for a football player to cross over into the track world, for Epps, it just seems right.

“I ran in high school and then stopped because it wasn’t offered at Tyler junior college,” Epps said, “Coach [Ken Collums] wouldn’t let me join last year because he didn’t want me to get hurt so this is my first year back in a while.”

“I work out up to four times a day,” Epps said. “Football is fast paced but you get some rest periods. Track is just go-go-go.”

The track and field program is coming off of a conference title win thanks to the women’s cross country team back in the fall coupled with a strong showing at Texas A&M this past weekend for the first meet of the indoor season. They competed against some of the top teams in the nation, with athletes claiming top-10 finishes in a variety of events.

Epps competed in the 60m, which can arguably be seen as one of the most competitive races during indoor season.

“It was a little nerve racking,” said Epps, in regard to lining up next to some of the best in the collegiate world of track. “But once I got in the blocks and started warming up, I settled down a little bit.”

With his first meet under his belt and unsatisfied with his time, Epps is looking forward to competing in two weeks at the University of Houston. He’ll race in the 60m as well as the 200m.

“Combine training is the number one goal,” Epps said. “But that doesn’t mean I’m going to be selfish and run a slow time. I also want to help the team. They’re taking the time to help me.”

Epps is in the right spot when it comes to growth. The ACU track program has seen an increase in recruits as well as performances since the transition into Div. I three years ago. The once-powerhouse of track in Texas is back on path to reclaim it’s title.

As for Epps, he’s definitely preparing for what may come in the future. But he also hasn’t lost sight of what’s right in front of him.

You are here: Home / Features / From touchdowns to timed starts: Epps transition to the track

The Wildcats’ Western Athletic Conference tournament run and season came to a ... END_OF_DOCUMENT_TOKEN_TO_BE_REPLACED