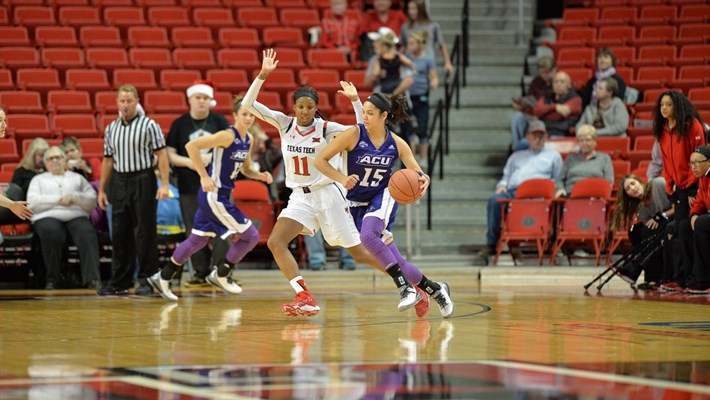 The women’s basketball team (12-2, 3-0) extended its winning streak to eight games with a 71-68 come from behind win over Nicholls State.

Already clinging to a one-point lead entering the fourth quarter, the Colonels (3-10, 1-2) opened up with an 8-3 scoring run to take their largest lead of the game at 62-56. The Colonels cushion quickly vanished when junior Lizzy Dimba‘s layup cut the margin to 66-65 with just over three minutes to play.

A layup gave Nicholls State a little breathing room at 68-65, but senior guard Whitney West drilled her only three-pointer of the game to tie it with just one minute remaining.

The Colonels were unable to score on the next possession, as junior Alexis Mason grabbed the rebound and earned a trip to the free throw line. Mason split the free throws, but gave ACU its first lead since early in the third quarter, forcing a Nicholls State timeout with 30 seconds to play.

“During the timeout, Coach Goodenough stressed how important this possession was and made it clear that all five players on the court needed to be in the same defense and sharp,” Mason said. “Coming out of the huddle we had the mindset that we were not going to lose this game and we had to get it done.”

ACU got just what it was looking for when it forced the Colonels to commit their 17th turnover of the game, giving the Wildcats the ball with 15 seconds remaining.

After two made free throws by West, the Wildcat defense came up with one final stop to secure a 71-68 victory.

“Today was a great battle against a very tough team,” head coach Julie Goodenough said. “I was really proud of how our players competed when we got behind in the 4th quarter. We have been in many close games before this season and are learning how to handle this kind of situation.”

The Wildcats started the game fast, posting a 30-point first quarter and building a 12-point lead. Nicholls State rebounded, quickly cutting the lead to four at halftime and eventually taking the lead early in the third.

“The key for the 30-point quarter was the starters coming out and setting the tone for the game,” Mason said. “Things were a little sluggish and we knew that we had to come out and bring energy from the very beginning in order to have a chance to win it at the end.”

Mason’s 19 points and career-high nine rebounds helped her in being selected as the Southland Conference’s Player of the Week, the first for Mason.

At 12-2 and 3-0 in conference play, the Wildcats currently sit atop the Southland, and received votes in the latest mid-majors top 25 poll.

“We really appreciate the attention by the mid major poll, however our focus is taking this one day at a time and one game at a time,” Goodenough said. “We know how good this conference is and how respectfully we have to prepare for each individual opponent.”

ACU returns home for its conference opener Wednesday night against McNeese State (10-5, 2-1), when they will try and push their home win streak to seven and their overall win streak to nine games.

UChorale and A Cappella have partnered to record a virtual Christmas performance. Read more below:
https://acuoptimist.com/2020/11/uchorale-and-a-cappella-ring-in-christmas-spirt-with-virtual-performances/

December graduates met for the traditional candlelight send-off at the Beauchamp Amphitheater Thursday night. See more photos from our gallery below: ...