You are here: Home / Features / Back on Track: Walker balances classes and track coaching

He trades out his stopwatch for a backpack, his running spikes for dress shoes and removes his racing singlet for a normal shirt. Ray Walker does all of this before lunch.

While most coaches are middle aged and a few years outside of their glory days, Walker, assistant track coach, is still in his prime.

Not only was he one of the first coaches to help mold the first conference winning team since ACU’s switch to Div. I three years ago, but he’s also getting his Master’s degree in Kinesiology from Hardin-Simmons University.

On top of that, he will be working toward finishing his original plan: completing his Masters in Divinity starting this fall.

Add that with planning workouts for his men’s and women’s distance teams, helping out the middle distance runners by running with them in practices and also traveling to every meet, and you have a busy schedule for anyone. 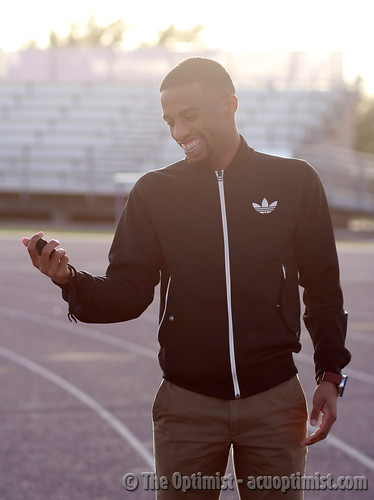 Factor in the idea that Walker is only 25 and about to have not just one, but two Masters degrees and you have a coach like none other.

“I started to get a Masters of Divinity,” Walker said. “I got into coaching and (head coach) Keith (Barnier) mentioned that a kinesiology degree would help me better understand my athletes and their progress.”

Just like that, Walker switched out of his degree plan with only a little over a semester left and transferred to Hardin-Simmons to purse his new calling.

“I chose divinity at first because I thought I wanted to start a church,” Walker said. “I was asking one of my professors about church and he told me ‘Ray, you know coaching is a ministry as well.’ And then my whole mindset changed.”

From then on, Walker has been committing his time to finishing his Master in Kinesiology. Last semester was his first full season managing coaching and classes at once. He took six hours last semester and is once again taking six hours now.

“It’s not easy but I’m glad it isn’t easy,” Walker said. “It makes me uncomfortable, but I know that’s when I do my best.”

Walk into the track room at any point after chapel, and you have athletes in and out getting treatment or talking to coaches about that weekend’s race. Walker’s office is always occupied with his distance athletes or anyone who just needs to talk.

He has his workout schedules next to his homework. Most days, he’s in the office late at night finishing papers as well as the next week’s workout, but Walker knows the payoff is worth it.

You are here: Home / Features / Back on Track: Walker balances classes and track coaching

Despite challenges created by COVID-19, freshman and sophomore retention numbers are holding with a minor decrease from fall to spring. Read more below:
https://acuoptimist.com/2021/02/freshman-and-sophomore-retention-numbers-comparable-to-2020/

Cullen Auditorium is scheduled to undergo renovation with the university hoping to break ground on the project this summer. Read more below:
http://acuoptimist.com/2021/02/cullen-scheduled-for-8-million-renovation/

Despite challenges created by COVID-19, freshman and sophomore retention numbers are holding with a minor decrease from fall to spring. Read more below: ...

Cullen Auditorium is scheduled to undergo renovation with the university hoping to break ground on the project this summer. Read more below: ...

Cullen Auditorium is scheduled to undergo an $8 million renovation with the university hoping to break ground on the project this summer. The project is set to renovate the inside of Cullen while creating a new lobby space. The hope for the renovation is similar to construction of Wildcat Stadium: k...
View on Facebook
· Share