The Wildcats needed just 11 seconds to determine the outcome against New Orleans University Saturday night. Trailing 84-82, freshman point guard Jaylen Franklin took the inbound pass the full length of the court in five seconds and the game-tying layup with five seconds to go. The Privateers had the ball poked away from Franklin on the ensuing possession and the Wildcats came up with the ball.

Freshman forward Jaren Lewis grabbed the ball and banked in the shot from the ‘U’ of the ‘ACU’ logo near half court to give ACU the 87-84 buzzer-beating win. The shot would be reviewed, but the replay showed the clock had started once the ball was inbounded and that Lewis released the ball with half a second left on the clock.

“I saw J-Frank get the steal, so I just took off to the other end,” Lewis said. “I was thinking that if he got in trouble, I could be there to help out. I got the pass and lined it up and threw it and it went in.”

The Wildcats, who ironically had uncharacteristically practiced half court shots during warm ups that afternoon, move to 8-8 in the Southland Conference and remain a perfect 6-0 at Moody Coliseum during league play. New Orleans drops to 5-10 in conference and 9-17 overall.

The Privateers extended their lead to eight points on a three-point make from freshman guard Coleman Edwards to make it 62-54 New Orleans with 10:16 to go in the second half. The Wildcats, who struggled for offense at time, responded with a 19-6 run over the course of four minutes that put ACU out front, 73-68. Senior forward Austin Cooke and Wentz hit back-to-back shots from deep, and Little hit all seven of his free throws in a row to lead the charge.

“That was a big moment for us, we did a really great job responding tonight and not getting down on ourselves and taking ourselves out of the game mentally,” head coach Joe Golding said. “There’s some games that we’ve had where we lose and we deserve to lose, but we didn’t deserve to lose tonight.”

Free throws and fouls were handed out thoroughly in this one. The Wildcats made 21-30 free throw attempts for the game, while the Privateers went 28-39 from the line, including 19-28 in the second half.

New Orleans, like they had so often in the game, didn’t cower away in fear. The Privateers grabbed the lead back, 79-77, after sophomore forward Michael Zeno (18 points, 10 rebounds) scored a layup and converted the foul for the three-point play the old fashioned way. With less than a minute to go, Little drove to the basket and missed the layup, corralled his own rebound and scored inside to tie the game at 79. 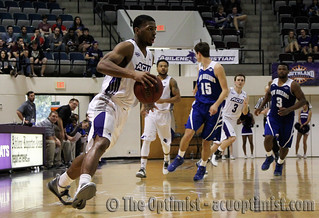 From then on, New Orleans would score only from the foul line, as they converted five of eight free throw attempts in the final 50 seconds. After Franklin cut the deficit to one with a layup and foul with 12 seconds to go in the game, the Wildcats were forced to foul the Privateers. Junior guard Nate Frye (11 points, nine rebounds) went to the line with a chance to put his team up by three. Frye hit the first but missed the second to put UNO up two.

Franklin and Lewis would take it from there.

“I’ve said it all year, these freshmen are something special,” Golding said. “They have worked all year to change the outlook of this program and the mentality of ACU basketball. It wasn’t an easy choice for them to want to come here with the recent history, but they wanted to change things and we’re headed where we want to go.”

On paper, the Wildcats appeared to be the better team against the Privateers. But New Orleans made ACU realize quickly that this would not be a game to simply walk-through. Sophomore guard Isaiah Tripp hit a three-pointer from the corner to cut the New Orleans’ lead to five heading into halftime, 40-35. The Wildcats hit just 3-12 from beyond the arc in the first half, while allowing the Privateers to shoot 54 percent from the field.

ACU started the game in a fog, allowing UNO to hold the lead for much of the first half. The Privateers used a 16-10 run to make it 38-30 after a fastbreak layup made it an eight point lead. Wentz came out of halftime aggressive, scoring a layup, a three-pointer and taking a charge that he was shaken up by, but would recover from.

The Wildcats finish off their season with two more home games at Moody Coliseum against two of the top teams in the conference. Rival Incarnate Word (15-11, 10-5) and Texas A&M-Corpus Christi (21-6, 12-3) visit Abilene to conclude the 2015-2016 men’s basketball season.

The Wildcats’ Western Athletic Conference tournament run and season came to a ... END_OF_DOCUMENT_TOKEN_TO_BE_REPLACED