For senior catcher Alex Copeland playing baseball was a given.

Growing up Copeland played football, basketball and baseball, but when he was forced to make a decision his sophomore year he said baseball was a “no doubter”.

“I’ve always loved the aspect of the game where when you step on the mound or get in the batter’s box it’s one man versus the other man,” Copeland said. “There’s no shot clock to run out and you can’t run the ball 3 times to kill time, you have to step in there and compete.”

A graduate of the largest high school in the state of Oklahoma, Broken Arrow High School teammates Copeland and life-long friend senior Aaron Mason knew as soon as they signed to Fort Scott Community College their journey would lead to ACU. 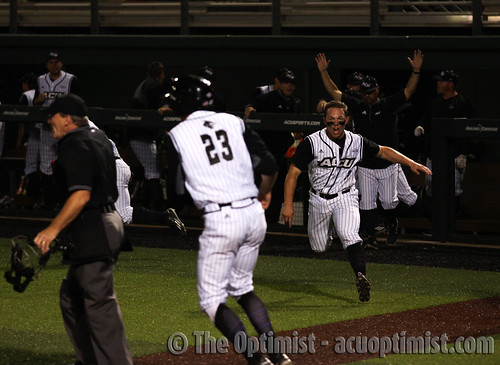 However, when Copeland arrived at the beginning of last season his role looked a little different than it does now. Although he started 46 games behind the plate a year ago, from an output and leadership standpoint, Copeland has stepped into an even bigger role this year.

“I think my role has expanded this year because when you come into a new place even being an older guy you have to prove that you belong and that those stats you brought in with you that you can back them up,” Copeland said.

As a teammate for 15 years, Mason said playing with Copeland in college hasn’t really been much different. Copeland still displays the same characteristics of leadership and consistency to the team he always has.

“Alex and I have been there every step of the way so our skills have grown together,” Mason said. “He definitely brings a leadership role to the team and he backs it up with his actions. He is a good motivator and sets a really good example for the younger guys.”

One of those younger guys is freshman catcher Conner Nichols. Nichols said Copeland is probably the biggest leader on the team, as he recalled a game earlier this season where the team fell behind early and it was Copeland, who addressed the team.

“We were playing SELU and they were kicking our tail,” Nichols said. “We got punched in the mouth and he came up and said you know you can’t back down. You’re gonna get punched in the mouth, you gotta hit right back, and he got us all out in the middle of the dugout basically screaming we gotta go man there’s not any stopping we can’t just take it, we got to give it back to them. And that kind of competitive desire that he has and he shows is a big deal on the team.”

Copeland has always had that competitive desire whether he is on the diamond or “playing his grandma in checkers,” and it was this attitude that translated into last offseason.

“Once the spring started last year and until now, I have tried to lead by example,” Copeland said. “My work ethic and everything else is a bonus, because no one is going to listen if you can’t look yourself in the mirror every day and make sure you are working harder than the people you are trying to lead.”

At 9-14 overall and 2-7 in Southland Conference play this year, the Wildcat’s have played one of the toughest non-conference schedules in the program’s history. Within that tough schedule was a trip back home for Copeland and Mason to Oklahoma to square off against Oklahoma and nationally ranked Oklahoma State.

“All four of those games in Oklahoma were really special,” Copeland said. “I grew up bleeding Crimson and creme so getting an opportunity to compete against those guys in Norman where I’ve been to many football games was exciting.”

Although the Wildcats were unable to pick up a win in those four games, Copeland said he will never forget one last time playing baseball in his home state.

“Aaron started in the last game of that series and for us this is our 15th consecutive year of baseball together,” Copeland said. “So I could go on and on about the countless memories and stories of our younger baseball days in Oklahoma, but those five innings out there together will definitely be at the top and will be something really cool to look back on.” 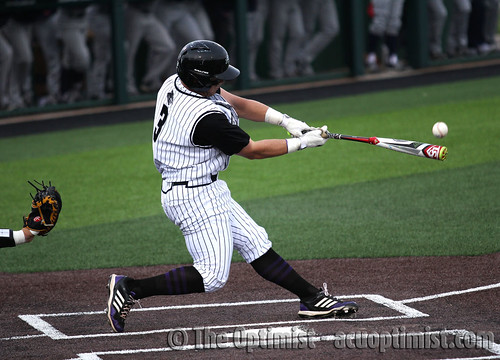 Despite being picked 11th in the Southland Conference preseason poll, there is a lot of optimism about moving forward. Copeland said team chemistry has been a point of emphasis this season.

“Team chemistry is huge, and as a group we wanted to make sure the freshman and sophomores knew that just because they were born a few years later than us didn’t mean we are different or entitled to anything,” Copeland said. “I am extremely proud of those guys, because I know how hard it is to make that jump. I went to junior college for a reason and so it’s really nice to be able to lead these guys and show them the ropes because the future is bright for this program.”

As one of those young guys, Nichols said as focused as Copeland is about making an impacting this year, he is constantly helping them prepare for the future.

“He said at the beginning of the year if I do one thing, I’m gonna have ya’ll ready for next year,” Nichols said. “And I think that’s a big deal.”

Copeland’s leadership on and off the field has showed up boldly in his statistics this season, as he currently leads the team in batting average, on base percentage and slugging percentage. Although there are still 35 games left in the season, it’s no secret he will be a tough component to replace in the future, and somebody is going to have to step up.

“It’s gonna be big shoes to fill,” Nichols said. “You just have to work hard and try to fill their shoes.”

The Wildcats’ Western Athletic Conference tournament run and season came to a ... END_OF_DOCUMENT_TOKEN_TO_BE_REPLACED