You are here: Home / Features / Often Overlooked: Palacios proves worth as walk-on

Athletes who are recruited and given scholarships are expected to perform. But sometimes, hard work beats talent when talent doesn’t work hard.

For senior Nick Palacios, this summarizes how he got here.

“I always knew I wanted to continue my career after high school and I knew I wanted to go to college,” he said. Baseball wasn’t his only motivation as he was able to become the first in his family to attend college. So he kept on playing baseball and working hard. 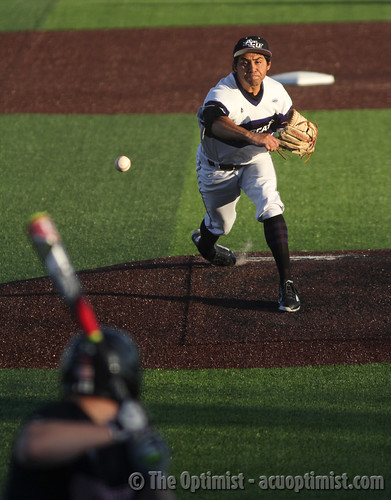 Though he isn’t the tallest guy, standing at only at 5’10″, he said, “I’ve always been the smaller guy, so that gets me overlooked sometimes, so I just had to work my butt off for this chance.”

Palacios walked on to the baseball team as freshman relief pitcher but even after making the team, it was difficult for him to get playing time since coaches prefer to put scholarship players out on the field.

“I had to work extra hard just to stand out to the coaches,” Palacios said. “A lot of times I felt like I would get overlooked in situations because I wasn’t on scholarship.”

But the hard work and time payed off.

Palacios appeared in 13 games his freshman season. Since then, he’s been a regular appearance out of the bullpen and this year Palacios was a big part of the success the team is having so far.

Palacios has appeared in seven games this season as the Wildcats closer, pitching 8.1-innings and only giving up one hit, one walk and racking up eight strikeouts to help earn him five saves.

None of that would have been possible without the support from his parents, as he pointed out they “had been dressing me up [in baseball outfits] ever since I was a baby, because that was my dad’s favorite sport.”

This played a role in developing his love for the game at the early age of four years old. Palacios kept developing year by year and in high school at Bandera High where he was named to the first team all-district, both as a pitcher and second baseman. He also was named Student-Athlete of the Year.

This season, he has his eye set on the ACU record books. The record for saves in a single season is 20, held by Jameson Maj in 2007.

Palacios said he “definitely wants to end it on a good note” and he’s going to “work hard and try to break the save record, which would be very special to me.” But when all is said and done after the season, Palacios says hopefully he’ll be able to continue a career in the pros.

The Wildcats will bring an 8-4 record into Stillwater, Oklahoma March 11th for a three game series against the Oklahoma State Cowboys.

You are here: Home / Features / Often Overlooked: Palacios proves worth as walk-on

The Wildcats’ Western Athletic Conference tournament run and season came to a ... END_OF_DOCUMENT_TOKEN_TO_BE_REPLACED