The ACU women’s basketball team ended their season over a month ago, but continued to receive accolades as a result of their success. Head coach Julie Goodenough was recognized with the Chuck Moser coach of the year award on Monday.

The Moser Award is named after the legendary Abilene High football coach, who coached the Eagles to three straight state championships from 1954-56, and has been awarded to the city’s top male and female coach since 1999 by the Rotary Club of Abilene.

“I love Abilene and the Big Country and consider it a huge honor to be recognized by the Rotary Club,” Goodenough said. “The list of previous winners is very impressive.” 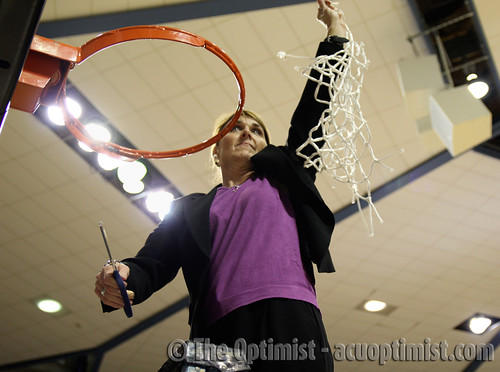 Goodenough was recognized with the award after she coached the Wildcats to a 26-4 record, which earned them a Southland Conference Championship and their first-ever trip to the Women’s National Invitational Tournament.

In 21 seasons as a head coach, Goodenough is 371-255 with 188 of those wins coming in nine seasons spent with Hardin-Simmons, the most by any women’s coach in their history. Goodenough is 82-35 since taking over at the helm of the purple and white, and has won two conference championships in just four seasons.

“This award for Coach Goodenough shows her leadership throughout the Abilene community,” Mason said. “She makes herself known in the community and has such a great demeanor that attracts our fan support.”

Two other Wildcats, juniors Sydney Shelstead and Suzzy Dimba, earned postseason honors and both players, along with Mason, were named to the Southland’s All-Academic team.

“Our team has been blessed with many individual accolades this season which is really a byproduct of the work and commitment invested by our team,” Goodenough said.

Goodenough was adamant about putting forth a team effort as the women embraced the phrase “Team First Wins.” As a result, the Wildcats’ posted one of the most historic seasons in ACU basketball history.

This historic season included a 14-game winning streak, which was the third longest in the program’s history and a .897 winning percentage, second only to the 1995-96 squad which posted 32 wins.

“When your focus is on the team, it sure makes for a fun season and we have learned that it actually helps the team get closer to reaching its potential,” Goodenough said. 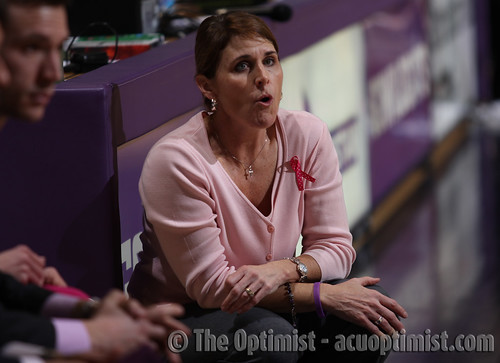 Goodenough signed a contract extension through 2020 following the regular season end and is just the third collegiate coach to win the Moser Award in its 17-year existence. The award is usually given to a local high school coach.

“She has been coaching for a while now and she knows how to get the job done,” Mason said. “Her attitude, love and passion for her players and the game make her successful and it’s about more than just basketball when it comes to Coach Goodenough.”

The coaching staff acknowledges that next season will be tough to top, but with Coach Goodenough secured for a few more years and nine out of 11 players returning next season expectations will be high.

“We are hoping our success just makes us strive for higher goals next season,” Goodenough said. “We learned that hard work does pay off.”

The Wildcats’ Western Athletic Conference tournament run and season came to a ... END_OF_DOCUMENT_TOKEN_TO_BE_REPLACED