You are here: Home / Features / Walker and Williams push Wildcat’s toward postseason contention

After ACU’s no. 2 and three doubles teams split matches with Lamar to start off the month of April, the decision rested on the shoulders of the Wildcats’ no. 1 duo: junior Erin Walker and sophomore Whitney Williams.

The duo fell behind 5-2 in the match and the outcome looked all but decided. But Walker and Williams rallied to win the next set and went on to win five-in-a-row to clinch the match 7-5 and the series 2-1 over Lamar. 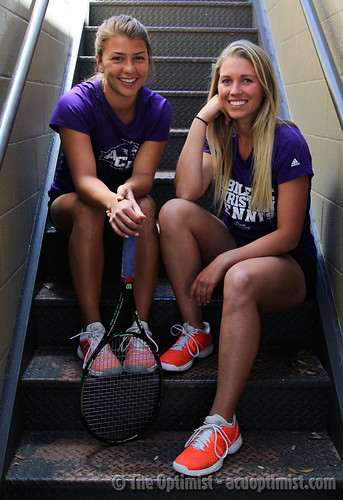 The duo is 15-8 in double’s competition this year and has propelled the Wildcats to an 8-2 record in Southland Conference play, which ranks them second behind Texas A&M-Corpus Christi with one conference match remaining.

For Walker and Williams, the road to collegiate tennis and ACU started at a young age. Walker, an Abilene native, said she was born into a family of tennis players and her own journey started when she played around the age of five.

“I started because my dad was a coach and both my sisters played,” Walker said. “So I’ve just played ever since.”

Williams comes to ACU from Anchorage, Alaska and said she began playing tennis around the same time as Walker. Each of them knew by around the age of 14 that tennis was what they wanted to do.

Walker was the runner-up at the state tournament her senior year as an Abilene High Eagle, and as a freshman was named to Southland Conference Commissioner’s Honor Roll before she joined forces with Williams last fall.

Williams said when the two played their first doubles match over a year and half ago they were teammates, but now 18 months later they’ve formed a much stronger bond.

“At the beginning when we started playing together, we weren’t as close of friends but now we’re best friends and get to play with each other and so that’s really cool,” Williams said.

Head coach Hutton Jones said the biggest improvement he’s seen in his players is their belief system out on the court. 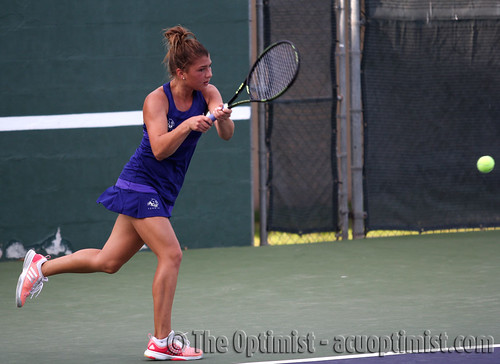 The duo played well together from the start, as they earned the Grand Canyon Invitational tournament title in their first doubles action together. In fact, they cruised to the title in three straight matches and repeated as champions again this past fall.

“From the beginning of playing with Erin, I just thought we were really insync with our games and everything,” Williams said. “Us winning that Arizona tournament back-to-back, that’s pretty cool and doesn’t happen all the time.”

Since the beginning of last spring, Walker and Williams have combined for 54 singles victories and have won 26 doubles matches.

Jones said both players have good serves and attacking skills, which bode well in the doubles style of play. However, he said a “low, laid back” energy doesn’t exist in high level doubles.

“They mesh well because they are both ‘laid back’, but that actually doesn’t bode well to be laid back in doubles,” Jones said. “When they have played their best they have recognized this weakness and brought ‘Great Energy’ to the court.”

Over the course of their playing together, the two have realized this difference between playing doubles and singles. In fact, Walker even said she used to like singles more, but after playing more doubles matches with Williams, she has grown to enjoy them. 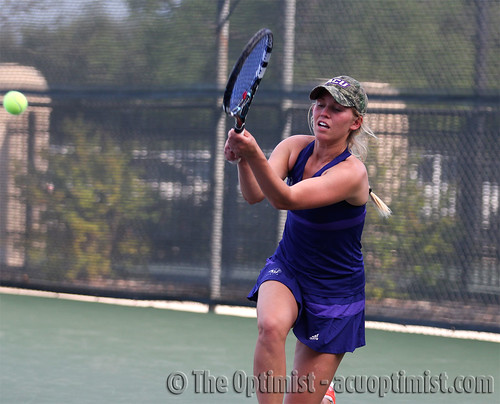 “Basically we’re just more aggressive and it’s just a quicker pace,” Walker said. “You get to the net more.”

When playing as the no. 1 team there can be a lot of pressure to perform, but the duo said they understand they have to set the tone. But more importantly they just continue to play for each other.

“When we’re playing together whatever position we’re in we’re either trying to protect the person at the net or we’re trying to set them up and I think you really pay attention to that,” Williams said. “We have gotten closer by playing together because we’re so in tune to each other’s emotions and just like the look on each other’s face and we know like when to lift each other up and stuff like that.”

With one conference match and one non-conference match against Midwestern State remaining on the schedule, Williams and Walker will have their sights set on making it to Ojai, California, at the end of the month for the Ojai Tournament.

“They have done well at a tough position, number one doubles, and if they become even more professional in their on-court energy they have unlimited potential,” Jones said. “They are capable of a national ranking.”

You are here: Home / Features / Walker and Williams push Wildcat’s toward postseason contention

UChorale and A Cappella have partnered to record a virtual Christmas performance. Read more below:
https://acuoptimist.com/2020/11/uchorale-and-a-cappella-ring-in-christmas-spirt-with-virtual-performances/

December graduates met for the traditional candlelight send-off at the Beauchamp Amphitheater Thursday night. See more photos from our gallery below: ...