Students dressed up in their finest Friday evening at the Paramount to participate in the 10th annual FilmFest gala to celebrate the winners of the competition.

Results are as follows:

Andrew Koenig, sophomore theatre major from Mission was seen in two films including The Key of L and Nerf Wars II.

“I didn’t really know what to expect but I had a really great time,” Koenig said. “It was different coming from theatre doing films at a different medium.” 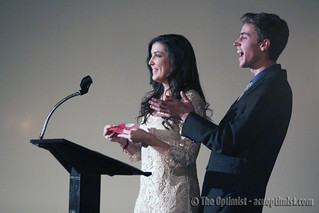 “I really like directing,” Porter said. “Working with actors is something that I’ve always loved, being able to bring people together and use their talents to tell a story.”

Tim Holt, director of Nerf Wars II, said his team members tried to take the judge’s critiques that they received last year and apply them to this year’s film.

“We were kind of getting familiar with the process,” said Holt, junior digital entertainment technology major from Plano. “The process of making a film is always insane, but this year I think it was a little bit smoother.”

The first floor of the Paramount was packed with ACU students for the viewing.

“Yes, it’s a competition, but this is just awesome; the event is so cool,” Holt said. “It’s just for the love of film.”

Holt said he is considering pursuing a career in the film industry.

“It’s a crazy industry. It’s full of lots of challenges, lots of heartbreak and lots of success,” Holt said. “It’s going to be a journey.”

Students attended a come-and-go brown-bag lunch Friday afternoon in the basement of the Campus Center, during which the FilmFest judges told students about their film careers.

“It’s crazy not to create more opportunities for students to have that advantage,” said Tom Craig, director of student productions. “They’re here, so why don’t we create this situation where our students get the benefit of all the mind power that is here on campus. These are people that are writing films, editing films, casting all right now.”

In addition to the lunch, the judges stayed the day after FilmFest to discuss with students how to improve their films.

“The judges have already told me that the level of film production amongst our students is excellent,” Craig said. “We’ve had some of our FilmFest judges offer our students internships just from getting to know them while they are here at FilmFest.”

“We need more people that believe in good values and have a message to share that is positive,” Brewer said.

“Ten years ago, they didn’t have a learning studio,” Brewer said. “A lot of things that have changed in the last 10 years, FilmFest has put a spotlight on some things that were needed.”

Kari Hatfield, assistant professor of acting and theatre history, said she was honored to be included among the other judges.

“I know how hard it is to put together a film,” Hatfield said.

“God created art, He created beauty, so we should just create those things that come from an upwelling of just reverence for Him and wanting to communicate who he is,” Patenaude said. “It offers an opportunity for people to express what they know about life and what they know about God.”

The Wildcats’ Western Athletic Conference tournament run and season came to a ... END_OF_DOCUMENT_TOKEN_TO_BE_REPLACED