You are here: Home / Showcase / Soccer wraps up 2014 campaign

The women’s soccer team concluded its 2014 season earlier this week as second-year members of the Southland Conference. The Wildcats finished the year 8-9-2 with an in-conference record of 5-4-2.

ACU finished with a lesser record than last year, going 13-5-1 overall and 7-5 against Southland programs. But with a lot of new faces for the Wildcats, a transition year was to be expected.

“All in all, we would have liked a few more wins this year in conference play, but qualifying for Southland Conference postseason play in each of our first two seasons is a great feat,” said Casey Wilson, head coach. “All you can do is put yourself in a position to get in the postseason. After that, it is anyone’s game in the tournament in which the tournament champion receives an NCAA bid, if we were post-season eligible.” 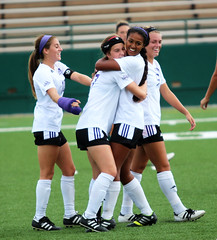 While ACU finished fourth in conference this year, as new Southland members, the Wildcats do not qualify for postseason competition.

With construction of a new soccer field beginning this semester, the Wildcats were forced to play at Shotwell Stadium.

“It’s definitely different playing on a turf field, but practicing all preseason on turf helped make the adjustment easier,” said Baylee Mitchell, freshman forward from Flower Mound. “We knew the changes of the game the type of field had, so we just had to find a way to figure it out before each game and make the necessary changes during our games.”

The Wildcats started off the season with difficult opponents set in the schedule, going up against top teams across the state such as University of North Texas, Texas Christian University and nationally ranked Texas Tech University. ACU entered conference play with a 3-5 record before taking on Sam Houston and Houston Baptist on the road.

“By not being afraid of playing the best teams in the country, you allow your team to be exposed to an elite level regardless of the wins and losses,” Wilson said. “If you can compete in that arena, then you should be able to play on the upper crust of the Southland Conference. Sam Houston, SFA and ourselves stacked our schedule with great non-conference competition, and that helped each of us in conference play.”

ACU started off 4-2 in conference play before its showdown with number-one ranked Stephen F. Austin. After a tough battle, the Wildcats weren’t able to overcome the Lumberjacks, falling 1-0 at home. The Wildcats struggled down the stretch of the season, dropping three of the team’s final five games with one double-overtime tie coming against the University of the Incarnate Word in San Antonio. 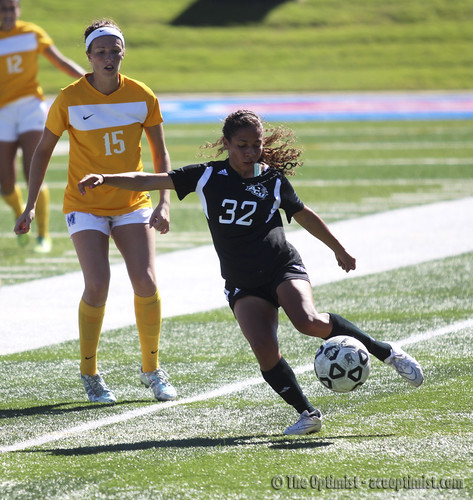 With a solid group of seniors like Madison Brown, Taylor Brown, Katie Stivers and Sarah Schoch, the team was able to rely a great deal on their veteran leadership. Young faces also had an impact on ACU, especially newcomer Baylee Mitchell. Mitchell led the Wildcats in scoring and was one of the top offensive players in the conference. She finished tied for fourth in the Southland in goals scored with seven.

“I think freshman year has been an awesome learning experience for me,” Mitchell said. “I know my role on the offensive end, and working with my teammates for a season now will help all of us move forward in a positive direction. I know what my teammates and I are capable of and plan on going into offseason and next year’s season with a mindset to have an even better year next season.”

“We competed in every game we played in Conference,” Wilson said. “The losses we had were 1-0 in overtime, 1-0, 2-1 and 1-0. There was not a single game we played where we did not have the opportunity to win which is a positive and all we can ask for.”

You are here: Home / Showcase / Soccer wraps up 2014 campaign

The Wildcats’ Western Athletic Conference tournament run and season came to a ... END_OF_DOCUMENT_TOKEN_TO_BE_REPLACED