You are here: Home / News / Abilene community marches in remembrance of Dr. King

Men, women and children of all ages joined in the march including several ACU students and faculty members. 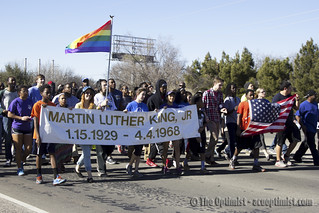 Taylor Crumpton, sophomore psychology major from Coppell, attended the march to remember and celebrate the sacrifices King and others have made to ensure all Americans are treated equally.

“As a student, I loved seeing so many students and faculty and staff from ACU supporting and keeping Dr. King’s message alive in Abilene,” Crumpton said.

Organizers of the march included members of local churches who provided water to marchers on the unseasonably-warm day. Abilene children carried a banner at the front, while some participants led the group in hymns reminiscent of those sung during Civil Rights demonstrations in the 1960s.

For some ACU students, the struggle for equal civil rights can seem too far back in the past, and therefore, not as relevant as it once was.

“I believe that many people believe Martin Luther King Jr. Day is only reserved for people of color and fail to see the universal message of equality Dr. King preached,” Crumpton said.

Abbey Moses, junior political science major from McKinney, maintains that the color of someone’s skin should not stop him or her from participating in social action.

“As a middle-class white female, I could easily forget the legacy of Dr. King, but I believe that our nation has a responsibility to continue his work,” Moses said. “Moreover, I believe that as a student and believer in the divine, I have been called to live a lifestyle that enhances the freedoms delivered by Dr. King.”

Moses said she attended the march to call attention to current racial injustices that remain today and “show solidarity with my brothers and sisters of all races and socioeconomic classes.”

Many participants and leaders of the march spoke of the current racial tension that America has faced in the past several months. There were many calls for peace, as well as continued vigilance in regards to how we treat each other, regardless of skin color.

King was assassinated in Memphis in April 1968 at the height of racial tension and change in the South, which had been his battleground. He would have been 85 this year.

You are here: Home / News / Abilene community marches in remembrance of Dr. King

The Wildcats’ Western Athletic Conference tournament run and season came to a ... END_OF_DOCUMENT_TOKEN_TO_BE_REPLACED