The ACU Police Department and the Abilene Police Department organized a full-scale training operation on Jan. 7-8 in the building slated for demolition, calling in specially trained groups like the SWAT team, crisis negotiation team and bomb squad.

“These kinds of attacks have become more frequent in institutions in our country, which demands a quick response and people who are well trained,” said ACUPD Lt. Randy Motz said. “You only get one chance at it, and you better make it right.”

The simulation is not uncommon for ACUPD or APD, with one or two similar simulations scheduled each year. However, in this simulation, the officers didn’t have to worry about harming the building.

“It allowed us to, if we had to, do what we would in a real-life situation,” Motz said. “We were allowed to use tools without worrying what we might break.”

ACUPD roped off the Chambers building to set up for the two training days filled with four hours of exercises, the first day dealing with active shooter simulations, generic SWAT training and breaching doors with pry tools, forcible entry and explosive entry. 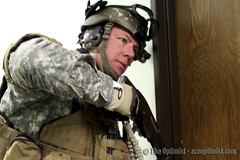 Ellison said involving the APD helped simulate as realistic of a situation as possible, and encouraged communication between his officers and the APD officers continuing the long-standing practice of joint training.

The second day focused on APD’s bomb unit which used one of its high-tech robots to blast open doors with its high-pressure water canon, breaching and navigating stairs.

As for damages done, Ellison said about 24 doors were forcibly entered, and low-level explosives were detonated throughout the building.

Ellison said he appreciated the understanding of students and faculty as ACUPD sent out multiple texts and emails about the event.

“We’re trying our best to keep the campus safe, and we hope everyone understands that,” he said. “We have to be prepared for the worst, even though we hope it never comes.”

The Wildcats’ Western Athletic Conference tournament run and season came to a ... END_OF_DOCUMENT_TOKEN_TO_BE_REPLACED