You are here: Home / News / The Fast-Track to Nowhere: ACU denied chance at shorter probation period

ACU athletic programs are no longer able to take advantage of a system that once allowed the opportunity for a sports team to compete for a conference championship.

Kelsey Dombrowski, sophomore goalkeeper, was not expecting this when she committed to be a Wildcat.

“When I first committed to play soccer, they were still a Div. II program and I was really excited about the opportunity to maybe win a NCAA championship,” Dombrowski said. “But that was shot down when I found out we were moving to Div. I.”

With the introduction of new NCAA rules, ACU and other reclassifying programs are no longer able to fast track their teams into post-season play. When a school moves up in competition to a Div. I conference, the athletic programs are required a suspension period in which they are ineligible for post-conference play. This suspension ruins the chances of players such as Dombrowski of ever competing for a NCAA championship.

“When you go through all the pains during season and do well enough to move on to playoffs, it’s like a big slap in the face,” Dombrowski said. “Especially when you know that it will be like this for you all four years.”

Southern Illinois University Edwardsville (SIUE) was able to use the “fast-tracking” system as a way around the reclassification suspension. 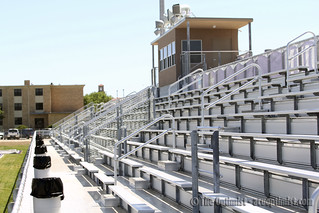 Transferring from the Div. II Great Lakes Valley Conference into the Ohio Valley Conference in 2008, the program was expected to sit out its normal four-year suspension. Two sports were “fast-tracked” out of this program – softball and men’s soccer were chosen by the NCAA in the 2011-12 season and were able to compete in post-season play.

This enabled teams to improve their skills so they had the possibility to play against stronger teams at a quicker date.

Lance Fleming, associate director of athletics for media relations at ACU, said he understands the luxury would offer great benefits to ACU’s reputation if it were still applicable.

“Fast-tracking was created with intentions to give athletic departments an option to move two programs up one year in the transition process, making that program eligible for conference and NCAA post-season play one year earlier than the other programs in the department,” Fleming said. “The only exception to that rule was that the program couldn’t be football, men’s basketball or women’s basketball.”

The athletic director of a program has the ability to decide which of the remaining teams will represent the school best while going against the competitors of the conference.

Unfortunately, SIUE is the last program that will be able to take advantage of this reclassification luxury.

“When the NCAA opened up the re-classification process a few years ago and re-configured the application process, it took away an institution’s option to fast track a program,” Fleming said. “So that option is no longer available to ACU or any other program in transition.”

The ‘Cats went under reclassification in the 2012-13 season, meaning the athletic programs will be under suspension until 2017-18 season.

Michelle Hosick is Associate Director of Public and Media Relations for NCAA Div. I sports.

“Div. I members believe that schools transitioning to Div. I should be thoroughly prepared for all the expectations of Div. I membership,” Hosick said. “Additionally, the timeline allows both the Div. I membership group overseeing transitions and the schools themselves the opportunity to evaluate their progress.” 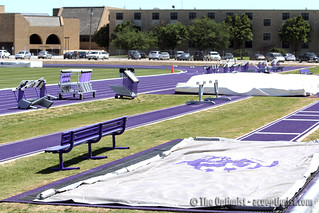 This change can greatly affect recruiting possibilities and can potentially lower the amount of talented athletes ACU is able to bring in. While soccer cannot even compete against all their conference opponents, track is able to participate in Southland tournaments but is still unable to compete in nationals.

Ray Walker, assistant track coach, explained the only alternative to this is to find top tournaments in the country to compete in.

“When you are recruiting some of the top athletes in the world, they want to compete against top people,” Walker said. “The only way to do that is to go to the national championship, where the best are, and compete.”

When players are recruited by a Div. I program, they expect to have a challenging experience. Once they find out the experience is not available, it leads them away.

“It’s hard to pitch the idea of having some of the world’s best athletes attend this school without being able to compete at nationals,” Walker said. “But we still do get some of them.”

Although athletes like Dombrowski would like the opportunity to play in a NCAA tournament, they still see their education excelling at ACU.

“I came to ACU because it was the right fit for me,” Dombrowski said. “I am definitely happy with the decision I made because I have some of the best teammates that I couldn’t imagine going through life without.”

You are here: Home / News / The Fast-Track to Nowhere: ACU denied chance at shorter probation period

Despite concerns about overall enrollment numbers due to COVID-19, university enrollment has increased due to new online programs. Read more below: ...

Overall university enrollment increased despite concerns that students would not return due to the COVID-19 pandemic. The increase in enrollment is due to new online programs, according to Tamara Long, vice president for enrollment. ACU Online added 15 new online undergraduate programs this year and...
View on Facebook
·Share

Members of the Abilene community gathered together to walk across the Martin ... END_OF_DOCUMENT_TOKEN_TO_BE_REPLACED