The men’s and women’s tennis teams finished their long seasons at the end of April after competing in the Ojai Valley Tournament in Ojai, California.

To cap off a 7-4 Southland Conference and 12-6 overall record, the women’s team finished the season on a four-straight conference winning streak not including the singles, doubles and Women’s Independent College Team championships the team won at Ojai.

“I think we just took momentum from one match to the next and just built on that,” said senior captain Brittney Reed. “We just built confidence, and at the end, we were just so excited to be there. It was such a great atmosphere, and we were all giving it our all for those last matches which really helped us. I think we all really just stepped up into our positions and fulfilled those roles well and took on our new roles as playing different numbers in the lineup and did what we needed to do.”

The men’s team didn’t perform as well, though.

Junior Jason Proctor said he and his teammates aren’t worried about the team or its players. 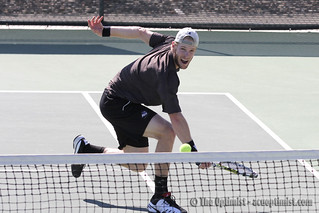 “As far as the record, we weren’t quite as good,” he said. “A large part of that was just being a little bit younger. But overall, we don’t really see it like that. We didn’t have anyone substantially underperform, and we felt comfortable where we were at.”

With an influx of new, younger prospects, the tennis team was able to grow together over the course of the season.

“In all honesty, I think the team chemistry was a little better this year,” Proctor said. “Everybody was tighter knit as a group, and for that reason, we got the most out of each other and made each other better.”

Reed also said the harmony of the different players on the women’s team directly affected the way her team was able to help each other and have a successful season.

“The team chemistry changes every year, and you’re in and out with different girls,” Reed said. “But this year, I feel like we really came together and we were able to encourage each other and work hard on the practice court, and that returned in the matches.”

Good tennis play is the result of good coaching, and the ACU coaches seem to be doing just that.

“I think the coaches are doing a good job and are taking us in the right direction,” Proctor said. “We’re going to be better next year than we were this year and (head coach Hutton Jones) is pushing and pushing the right attitudes, competing hard and letting the chips fall where they do, and that’s good for us to know that Coach isn’t adding pressure. They’re doing a good job, and they’re all pushing us to be better.”

Despite the season being over, Reed said she is satisfied with her performance and hopes to improve next year.

“This was one of my favorite seasons,” Reed said. “Even though I didn’t win every match, I feel like I grew as tennis player. It was just a season that was so much fun and I’ll never forget it.”